It was while sitting on the rocks by Merlin's cave in Tintagel, waiting for the tide to go out, that I was initiated into Merlin's magic circle. 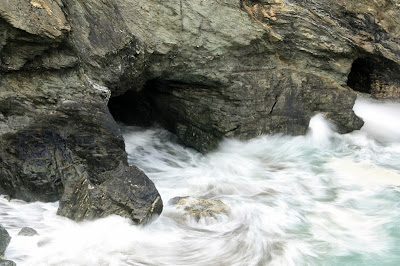 As I listened to the crashing of the waves on the shore I closed my eyes and felt myself being transported to an Otherworldly realm. I could see myself walking through a dark forest of twisted trees and gnarled roots that seemed to go on forever; but soon I saw a golden light ahead that seemed to be coming from a huge clearing like an arena. I stepped forward into the forest clearing and could see a golden yellow band of light ahead of me, encircling the entire arena like a shimmering golden ring. I stepped into the band of golden light and saw my world turn yellow and hazy before my eyes before stepping out the other side to be greeted by the most astonishing sight I had ever seen!

A huge baying crowd of the most fantastical magical creatures were gathered there in a mighty host, forming a deep crowd around a clear central area as if awaiting the start of some great performance. All the demons in hell and all the mythical beings of faerie could not have rivalled this crowd. I saw goats' heads, dragon wings and tiger bodies; horns, hooves, fangs and feelers; creatures tall and spindly like giant birds, or small and red-faced like angry leprechauns. Tooth, claw, colour and chaos. It was more than I could possibly take in, but as I drew nearer and stepped through the crowd my eyes alighted upon a lone figure standing in the centre of the field.

He was dressed in deep blue robes and a skull cap, and kept raising his arms to the cloudy skies as if performing some heathen ritual. I knew in my heart that this was the wizard Merlin. As I broke through to the front of the crowd I noticed he was carrying a wand in his left hand which he suddenly pointed in my direction. He turned to face me and gently beckoned me forward.

Hesitantly I stepped into the arena. The crowd were roaring now, shaking their fists, stamping up and down, and flapping their grotesque wings. Merlin stood there with his arms outstretched and greeted me like an old friend. I knelt before him and he asked me if I accepted this initiation into his magic circle.

A hundred thoughts tried to enter my head all at the same time, doubts, fears and more, but I knew why I was here, my path was clear. I simply shut all the thoughts out and said, “I do.”

I had no idea what lay ahead, I just knew that it was the path I wanted to follow, to experience whatever may come my way, for good or bad.

As I spoke he tapped me on the head three times with his wand and the crowd gave off a huge cheer. As simple as it was, my initiation was complete.

This was to be the start of a magical journey that would lead me to many of the most wild, remote and fantastical places of the British Isles and beyond. A mission that would be revealed to me only slowly, and which would at times seem senseless and without direction, while at other times would make me feel like the very mysteries of the universe were being revealed to me.

I opened my eyes and found myself back on the shoreline in Tintagel. My new friends Alphedia and Auraengus were there, chatting away with some of the other folks who had followed us down to the shoreline. I had met them only a few days before, at 3 Wishes Faery Festival on Bodmin Moor where Alphedia had been giving a talk on the fairies and channelling the nature god Pan.

They had come here to Tintagel to perform a ritual in Merlin's cave, but right now the tide was in, and so the cave was made inaccessible by the waves.

I stripped off and went for a dip in the ice-cold seawater outside the cave entrance, my new friends thought I was crazy, but I was enjoying the icy bite of the water. I disappeared behind a large boulder but the lapping waves were now coming up to my head so I decided to turn back for the shore to dry off and warm up in the sun.

Over tea and cakes in the beach-side café we had some interesting esoteric discussions before heading back to our B&B to freshen up and await the evening's low tide. 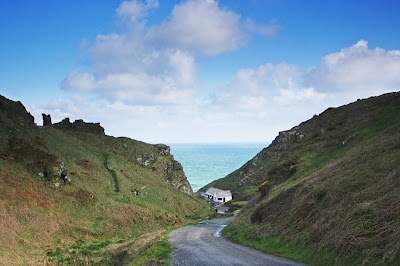 We returned later and the tide was now far out, the sandy cave entrance looking invitingly mysterious. The cave was broad and tall, about 20-30ft high, and emerged right under the headland that carried Tintagel Castle high above. It continued all the way out to the other side of the headland where daylight could just be seen filtering through and the crashing of the waves on the far side could just be heard. 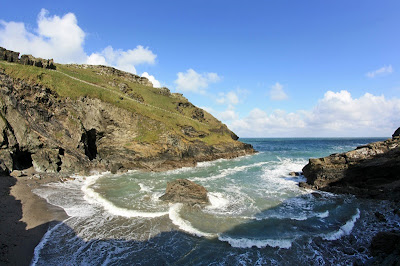 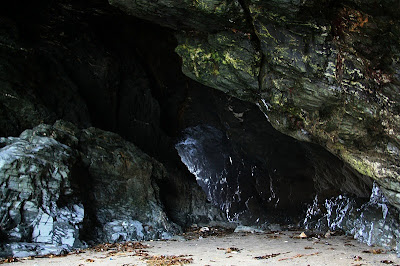 As I gazed around, exploring the cave's hidden wonders, Alphedia stepped up to one of the rock-pools, and after a while, eyes closed and arms by her sides, started to sing a gentle and enchanting tune of a kind that I'd never heard before. It was as if, in a trance, the fairies were singing through her and enchanting the whole cave. 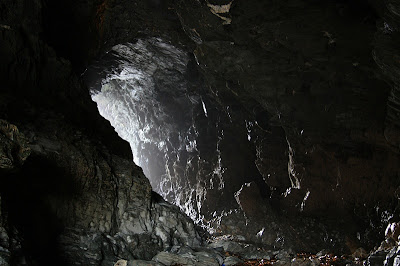 I left Alphedia and Auraengus behind and travelled as far as I could through the cave until the rocks became too jagged and slippery for me to safely continue, but I could see the ocean ahead on the far side of the cave. I was quite new to all this spiritual stuff and still fairly embarrassed by it, which was why I chose to find my own quiet corner of the cave in which to meditate. Standing there I closed my eyes and altered my breathing, and was soon carried away by melodious sound of Alphedia's enchanted singing, distantly echoing from the far end of the cave. 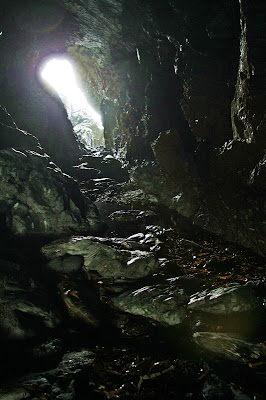 Suddenly the water ahead of me erupted and I saw the sea god Neptune rise up out of the waves! Bare-chested, bearded and wearing a golden crown he smelled of seaweed and the ocean's depths. The water cascaded from his trident and torso as he rose up to fill the entire entrance of the cave, like a mighty titan of old.

“Fetch me my undines!” he bellowed, his voice booming and echoing around the whole chamber.

In my vision I could see his mermaid helpers, fishy-tailed and seaweed haired, swimming towards him under the waves. Not beautiful maidens like they are in fairy tales, but half fish, half human creatures of the salty depths.

Then as soon as he had appeared he was gone, crashing back down under the waves the same way that he had arisen. What was the significant of this? Why had the god of the sea presented himself to me and commanded me? That would have to remain a mystery for now.

Alphedia stopped singing, but she was still standing by the pool with her eyes closed, deep in meditation. After a while she opened her eyes and I had to ask her where she had learnt such beautiful music.

“The fairies taught it to me!” she replied.

How could I deny it?

Alphedia closed her eyes again while Auraengus busied himself in the sandy entrance, carving strange sigils into the sand. 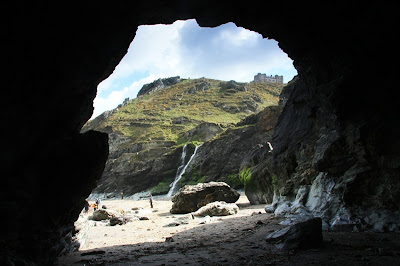 Wondering what to do I sat down on a rock and closed my eyes again.

Almost instantly another titanic figure rose up out of the pool ahead of me, filling the cave so that he had to crook his neck up against the ceiling! From the goats legs and horned head that peered down at me from the roof of the cave I instantly recognised him as the god Pan. His great smelly goat's legs seemed to fill the cave, his huge cloven feet planted firmly on the rocks before me. He didn't speak, he just looked down at me, smiling. 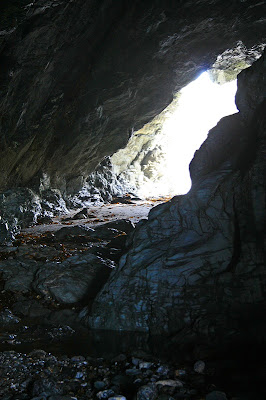 Could this day get any stranger? Alphedia had finished her meditation now and was about to start a ritual that Auraengus had been preparing. Alphedia told me that three witches had been trapped in this cave long ago, their spirits forced to reside here all these long ages, but now it was time for them to be moved on into the light. We would be performing a ritual to facilitate this, and we would be doing it now in the magic star that Auraengus had laid out in the sand.

We each performed our part of the ritual as instructed, and when it was over Alphedia told me that it had been a success, the witches had been successfully moved on, and our good deed was done for the day! The spirit of Merlin then visited us each in turn, and presented us with magical crystals in return for our labours.

By now the sun was going down and the day was drawing to a close, and what an extraordinary day it had turned out to be! I had never done anything like this before, but somehow it all seemed natural, I just accepted it and went along with it, wondering what would happen next!

I knew one thing, after this day my life would never be the same again.