The Pigeon Hole and the Magic Trout

There are many tales from Celtic legend about sacred trout or salmon, and they are often associated with holy wells and springs. I wasn't sure if any of these places from legend still existed but I was determined to track down one of these wells, even if the sacred fish were no longer to be seen there.

A little research led to me to a cave in Ireland called Poll na gColum, which in English mean "The Pigeon Hole". It is accessed by a flight of rocky steps that lead directly down through a fissure in the earth into a large cavern through which flows a small underground stream.

The legend of the "fairy trout" associated with this cave tells of a pair of young lovers who were engaged to be married, when one night the man was ambushed and killed, and his body thrown into the nearby lake. Soon afterwards an unusual trout was seen in the waters of the Pigeon Hole. The young maiden was stricken with grief for her lost love but soon she too mysteriously disappeared. Not long after that a another mysterious trout was also seen in the cave, but this time it was pure white. People said that the fairies had united the lovers in the water and ever since that day these magic trout had been held in reverence by the locals as sacred fish.

Many years later a outsider went fishing in the cave and caught the white trout. He placed it on his gridiron and immediately the trout transformed into a beautiful young woman who begged to be allowed back into the water. The stranger obliged her, but ever since that day when the white trout was seen it had the strange markings of a gridiron on its sides.

I had no idea how I was going to find this well, the only information I had to go on was that it lay "between Loch Mask and Loch Corrib" to the west of the village of Cong, so on my recent visit to Ireland I took a detour from Galway to Cong to see what I could find.

Cong was a beautiful little stone-built village with a broad shallow river running right though it. I went into the local store to ask about the Pigeon Hole. The girl at the counter had no idea what I was talking about. I was starting to worry that I might just be chasing legends! She called over an older lady who immediately started giving me vague sounding directions in a broad Irish accent. "Just out o' de village to yer right, up to de crossroads wi' de boats and it's just along dere on yer right!"

It seemed too easy so I got her to clarify it a bit. Slightly more confident I then set off up the road, half expecting to end up in the middle of nowhere without a clue where to go next! I drove across the river to the right of the shop, and then continued quite a long way until I came to a crossroads where I was surprised to see a boatyard! I followed the small lane to the right until I came to a layby with a footpath leading away into woods which glistened in the damp drizzly air.

Following the footpath through the trees everything seemed glow magically green, from the bright green moss to the wet green ferns. I could hear the birds singing in the trees, but all else was silence until I approached small clearing ahead. Through the rocks scattered around there I could hear a vague rushing sound and I knew that somewhere near here must lie the entrance to the fabled cave!

It turned out that the cave was not difficult to find. In the rocks directly ahead of me a large fissure appeared in the ground, and down the centre of the fissure a flight of rough stone steps lead down into the bowels of the earth. 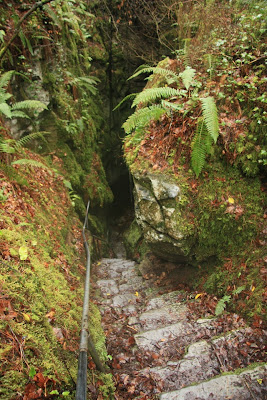 The rushing sound bellowed forth from this crack in the earth, betraying the presence of the river far below. The steps were steep and slippery, but luckily a handrail had been provided for visitors. I knew that in times gone by washer women used to descend these steps to do their laundry, though why they would choose such a dark subterranean location for their ablutions is hard to say. 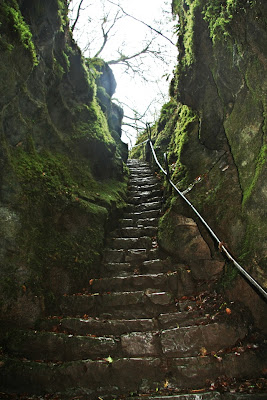 At the bottom of the stairs the fissure opened out into a large cavern through which ran a fast flowing stream of water. 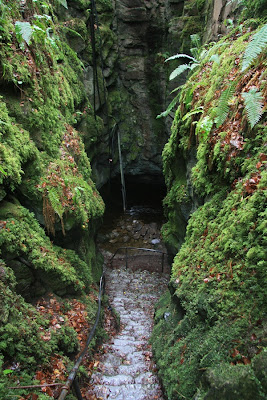 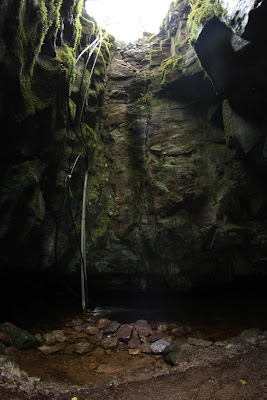 I climbed down and then gazed into the water, shining my torch around, but could see no life in there at all. To my left the stream emerged from under a wall of rock, while to my right the stream flowed down along the far wall of the cavern until it disappeared into the darkness at the far end of the cave.

At some point in the past there had been a cave-in and now the whole right side of the cave was half filled by a jumble of boulders, but undeterred I was determined to explore those far recesses. I gingerly crept and crawled over the slippery rocks with only my small hand torch to guide my way through the blackness. Several times I could see the stream flowing under the rocks beneath me but eventually I stumbled my way to the far end of the cavern where the stream narrowed and flowed out of the cave to continue on its subterranean journey before it emerged again into the river at Cong. 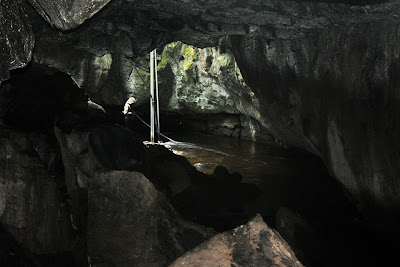 I could go no further that way but instead climbed upwards through the jumble of boulders to explore some of the far corners of the cave. When I had got almost as far as it was possible to go from the entrance I noticed my torch alighting upon some small black balls suspended from the ceiling. It didn't take me long to work out what they were, bats! 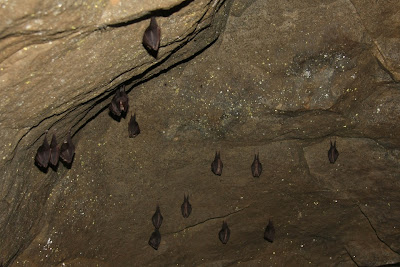 I crept as close to them as I could, half expecting at any moment that they would burst to life and start flapping all around my head, sending me into a spin, but luckily that never happened, the bats didn't seem to take any notice of my presence despite shining my torch on them from only inches away. 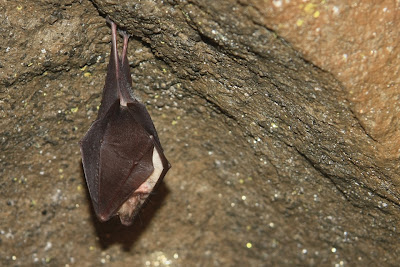 Satisfied with my discovery I headed back over the rocks to the base of the steps. I put my bag down and sat on a rock, gazing into the flowing stream. I noticed that the water ahead of me seemed to well up, like there was an underwater spring there. Perhaps that's what made this place a holy well?

I gazed into the water some more and then closed my eyes...

I had a vision of the white trout swimming against the current. Then from behind me to my left a man stepped into the chamber. He was an Irish king from ancient times, wearing a short robe of plaid with a small golden crown holding down his neck length hair. He carried before him, reverently it seemed, a richly decorated equal-armed golden cross like some ancient reliquary. He passed by me and stepped down into the water, the water covering first his bare legs, and then his robes until he was completely submerged. He continued down down underwater, still holding the cross before him until he stood on the very bottom of the river. There he lay down with the cross over his chest and slowly his corpse dissolved away into the current until only the golden cross remained and fish swam from his bones. All the while the white trout looked on.

The next thing I could see were shades emerging from the two ends of the cavern, at the outflow and inflow of the stream. These dusty ancient ghosts looked like chieftains and heroes from times long gone. They gathered around the golden cross and formed a circle of around two dozen souls, all gazing inwards towards the ground before them.

At this point the vision ended and slowly I opened my eyes and gazed upon the dark brown pattern of the stream flowing before me. But something wasn't right. The stream shouldn't be flowing like that. There was something moving in there! As my eyes grew accustomed to the waking world again I slowly realised that I was gazing at a fish, a trout! Was I still dreaming? No, there was not one trout, there were two! One was light and speckly, while the other smaller one was pure black.

I was sure that these were magic trout, I had been blessed by their appearance!

I was not tempted to try and photograph them, I knew that their presence was meant just for me, and that such elusive and magical fish could not be photographed in any case. As I gazed at them, wondering what they had come to communicate to me, I suddenly knew what I had to do. I reached into my bag a withdrew my wand and a crystal. I summoned the white light and magical healing energy and then planted my wand into the stream before me. I held the crystal in my hand and filled it with energy and intention and then cast it into the water.

I saw the crystal tumble down and down into the depths of the stream and then alight upon the very centre of the golden cross. It fixed itself there firmly and filled the cross with its energy. The cross slowly started to rotate and sent out a burst of pure white light in all directions. The white light filled the ghosts and ancient heroes, releasing them and transforming them into beings of light, no longer burdened with the weight of their past. As the cross span it started to rise, higher and higher, it transformed into a Brigid's cross, like a slowly spinning Catherine wheel. Higher and higher it climbed until its image was superimposed upon the face of the sun. The cross and the sun became one. The cross was the sun.

Well what did that all mean? I didn't even try to analyse it, I just accepted it, and accepted that its meaning would be revealed to me in due time. I had come to this cave like a tourist, with no expectations at all, I didn't even expect to see any fish! But somehow I was meant to be there, and while I was there everything flowed just as it should, without any preconceptions or imposition of my own will upon the situation. I realised that I had been trying too hard recently, and that this had caused me to become burned out until I really had started losing my way and not knowing where to turn next. But somehow I knew that I had to come to Ireland, and I knew that I had to look for magic fish there! 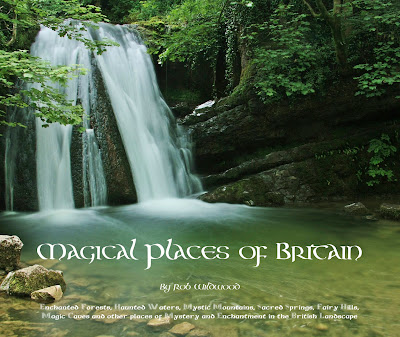