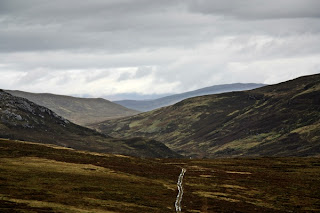 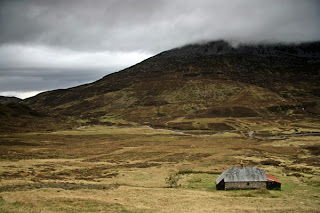 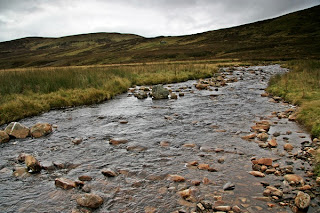 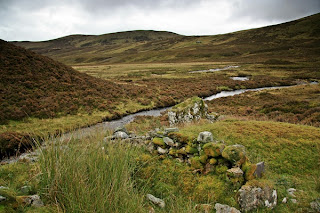 Merlindale is the place asscoiated with the story of "Merlin of the Woods". This is not the powerful wizard from the Arthurian tales, but a crazy wild man who lived like an animal in the woods near Drumelzier in Scotland. 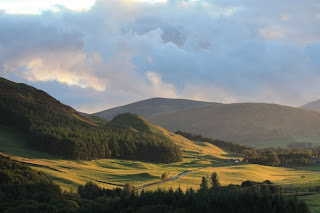 The famous early medieval historian Geoffrey of Monmouth joined these two tales together, claiming that in his later years Merlin became a mad hermit and disappeared into the forests of Scotland.

I had come to Merlindale to attend a course to learn more about this Merlin and make some kind of spiritual connection.

During the course I had a vision of a white castle where I met with Merlin. He gave me a magical compass which I should use to find the correct locations to bring down energy. This energy would be a kind of life force which would beam down to Earth from an extra-terrestrial source to animate the land and the life here.

I had no idea then how significant this was to become, and did not pay much attention to it at the time.

After our meditations we then climbed the nearby hill, on top of which stood crumbled and blasted stone remains of Tinnis castle. We performed a ceremony up there and made offerings of gold to the dragon. 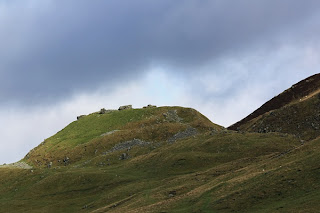 I could see the dragon sleeping beneath the hill, representing the powerful Earth energies there. Lines of power connecting him to other similar sites.

Earlier on I had made myself a wand made from hazel wood and carved with runes. I placed my wand on top of the hill and Merlin sent down a powerful column of white light, filling my wand with energy.

The next day I returned alone to Tinnis castle. Legend has it that the castle was blasted apart by gunpowder but I saw something quite different as I looked into the past. A column of white light, like an enourmous lightning strike, crashing into the castle from above and blasting it apart... What the reason was for this I could not discern, but it seemed to have something to do with Merlin.

From the top of the castle I surveyed the landscape laid out before me. I could see the river winding its way through the valley bottom and in front of it I could just make out a standing stone, known as Merlin's standing stone. 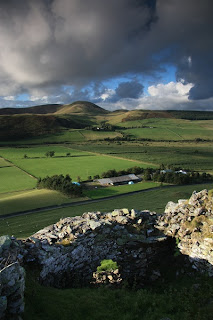 I climbed down from the hill and in the stone wall of the farm opposite I found a gap which folklore has it was made to allow free passage for the fairies as it lies on a fairy pathway. I wondered if the fairy pathway led to the standing stone, as it seemed to be heading in that direction? 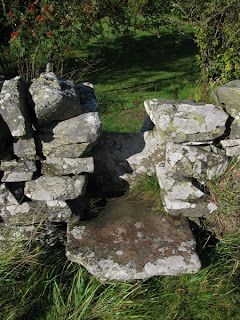 I then visited the standing stone and got a great view from there looking back to Tinnis castle. Could this be lying on a ley line? 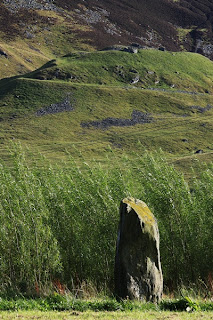 I visited a couple more sites associated with Merlin of the Woods, including Merlin's grave by the river, which I couldn't find, and Merlin's altar stone, which to me felt like it had been used for animal sacrifice. 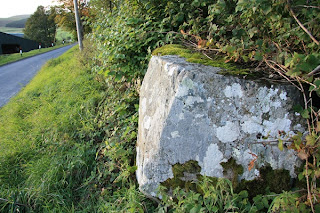 Merlin of the Woods was clearly a druid as in the tale he dies the classic druidic triple death: "Myrddin Wyllt prophesied his own death, which would happen by falling, stabbing, and drowning. This was fulfilled when a gang of jeering shepherds drove him off a cliff, where he was impaled on a stake left by fishermen, and died with his head below water."