After reading about some strange 'unknown structures' on the moors above Tarn Hole I decided that I would like to return there. The place was magical, a place of 'high energy', somewhere to absorb yourself in nature and recharge your batteries. The last time I had been there I had had the experience of becoming the wildman himself (see Tarn Hole - The Wild Man of the Woods )

I walked back to the magical glade where I'd had these experiences and as I approached I saw a leaf suddenly dance up into the air and then settle back down to earth again. There was absolutely no wind so I took it as a sign that this place still held its magic. I sat down there and meditated, and as I did so a small shiny greeny-blue fly landed on my knee and looked at me. It seemed like he had a message for me but I was in no hurry to go running off on another quest, so I just sat there soaking up the magical atmosphere of the place until the fly suddenly buzzed off, away across the stream.

After a while I got up and crossed the stream myself, and headed up the hillside through deep bracken that grew between small twisted oak trees. Soon enough I was out of the magical wooded valley and up on the high moorland, and it didn't take me long to find the stone structure that I had come here to look for. 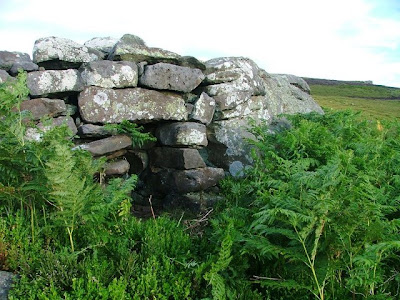 It looked like a shrine so I knelt before the small opening and left a food offering there. I then got up and did some dowsing to try and see what I could find out about this place. As I did so a large bumblebee suddenly appeared out of nowhere and buzzed round and around my head several times. He said he was sent by Marielle, the spirit of this place, and his message to me was that I should sit down inside the shrine and meditate there.

The hole was cramped and full of dried sheep poo, but I managed to cram myself in there and then tried to meditate again. At that moment the greeny-blue fly returned and landed on my knee again! I was sure it was the same fly I had seen earlier! This time I couldn't ignore him so I tuned in to see what he had to say.

He said he had also been sent by Marielle, the spirit of this place and the spirit of insects. He told me that my task now was to place crystals (quartz points) in springs to cleanse and purify the water and reinvigorate the land. This would prepare the way for 'The coming of the elves'. He also mentioned something about a 'ring of fire' which I didn't understand.

I was now feeling very uncomfortable and cramped in the hole so I got up and started heading back down into the wooded valley. But I hadn't gone very far down the hillside before I heard the very faint tinkling sound of running water. I thought I must be imagining it at first but then it grew louder as I found a tiny rivulet flowing through the bracken. Well where there's water perhaps there's a spring? I followed the tiny stream uphill through the bracken until it seemed to emerge from some rocks under a holly bush. 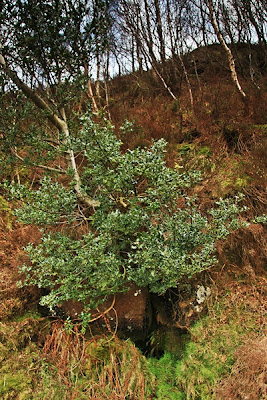 "It couldn't be!" I thought. I couldn't have found a magical spring so quickly! But as I pushed back the undergrowth and peeped under the dark shade of the rocks, there it was! 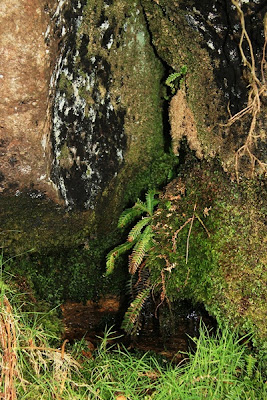 This place wasn't marked on any maps, I had found it purely through guidance and intuition. Now it just so happened that I was carrying some quartz points in my bag. The last time I had found a magic spring I knew I needed a quartz point, though I didn't know why, but at that time I didn't have any ( see Return to Scotland - Polveoch Burn, Aberfoyle and the Highlands ) so in the intervening period I had purchased some.

Now that I understood my quest I held the whole batch of crystals in my hand and called upon the power of Merlin to energise them. The crystals filled with a bright white light which spread to fill my entire body until me and the crystals became one, filled with the same energy. I then placed one of the crystals deep into heart of the spring, at its very source, and called upon it to energise the water, then taking out my drinking cup I drank three cupfuls of the clear sparkling water, thereby absorbing its magical energy back into my own body.

With my third eye I could see the crystal energising the spring, causing its water to shine with a brilliant white light. This white light energy was being carried downstream into the valley, flowing out into the world...