I knew I had an important task to complete today, so to avoid drawing attention to myself I didn't start near the village as before but parked up on Danby Rigg and followed an old overgrown footpath down the side of the hill.

As I neared the edge of the rigg the views of the Fairy Cross Plain below were spectacular. The morning mist that hung in the valley was just about to clear and a large bank of clouded blotted out the sun but was just giving way to reveal a beautiful blue winter sky. The rounded fairy hill that was the destination of my quest was clearly visible in the plain before me, sitting proudly like a pimple. 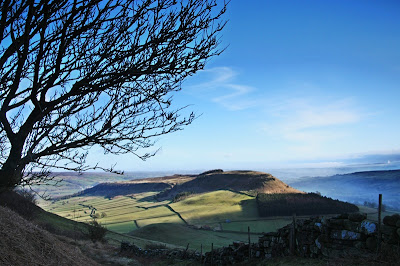 I scrambled on downwards through last-year's dried bracken and hopped over a drystone wall into the plain. 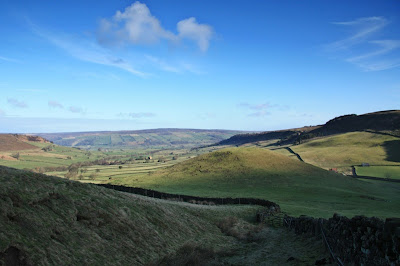 The fairy hill beckoned before me but I looped around the back of the hill to avoid prying eyes, and then made my way past the rabbit holes that cluttered its flank until I reached the summit of the mound.

My first job was to retrieve the 10 crystals that I had left there in January. I had popped them in the entrance to an old rabbit hole, but now, no matter how hard I tried I didn't seem to be able to find them. Perhaps someone else had found them, or perhaps the rabbits had buried them deep underground? I had one last look and then finally I spotted them! I stuffed my hand in the hole and pulled them out, one, two, three... I managed to retrieve only seven in all, so now I had to stuff my arm right down the rabbit hole and root around, clawing out mud and turf until finally, with great relief,  I retrieved the last one!

I placed them with the two new crystals I had brought along so now I had them all at last! Twelve fluorite eggs that had all been energised on the fairy mound at Lindsaylands in Scotland and had now been brought here to Yorkshire, for what purpose I did not know.

I sat there and meditated with the stones and fairy king Arathon appeared, with white beard and cloak, looking much as he had the last time I had visited. He instructed me to lay them out in a twelve pointed star and I remembered the pattern I had made at Doon Hill in Aberfoyle. What was the significance of this pattern? 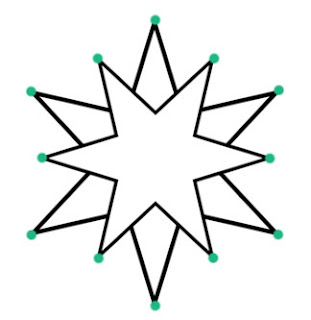 I started to place the crystals all around the top of the hill, but the hill top was rounded and uneven, and the grass was long, so I soon started to lose track of where I had placed the crystals. I started to panic and decided that I had to get all the crystals back before I forgot where they all were. I retrieved most of them but there was one which I just couldn't find no matter how hard I tried! I now had no idea at all where this crystal was, it could have been anywhere on the hilltop hidden in the long grass!

There was nothing for it, I took out my dowsing rods and decided that the only way I was going to find the crystal was to dowse for it. I walked around and around the hilltop with my rods out in front of me, focusing on the missing crystal. Suddenly the rods crossed over! I looked down at my feet and there it was, the missing crystal! If ever I needed proof that dowsing worked then surely this was it!

Happy to have my 12 crystals back again I walked to the very crown of the hill, stabbed my crystal tipped wand into the ground, and then laid out the crystals in a much smaller pattern around the wand. I now remembered that this was what I had attempted to do the first time I came here when I didn't have enough crystals with me. I guess that my experience at Aberfoyle had distracted me into thinking I had to lay the crystals out in a larger pattern. I had to learn never to assume that what's good for one place is suitable for another!

I stood there above my star grid, closed my eyes, and was just about to call in the energies when I heard the chugging of a tractor approaching the hill. It was the local farmer, no doubt come to give me a telling off for being on his land! I quickly grabbed up my wand and my dowsing rods and put them back in my bag, but by now he was upon me and was not happy! Who knows how long he had been watching me and what he thought I was up to up there. He probably thought I was after his rabbits! I tried to explain to him that I was just here to dowse for energy lines but he didn't want to know. Despite being only yards from a public footpath he basically harassed me until I was forced to leave.

No matter, I figured that I didn't have to be actually standing on the spot to call in the energies. I had left an imprint there and the crystals were still there in their star pattern, so all I had to now was find a suitable spot to call down the white light to energise this place. I continued northeast, crossed the lane and climbed Danby Head opposite, which is the long hill that separates Great Fryupdale from Little Fryupdale.

When I reached the top of the slope I stood up there on Danby Crags and looked back down over the plain. 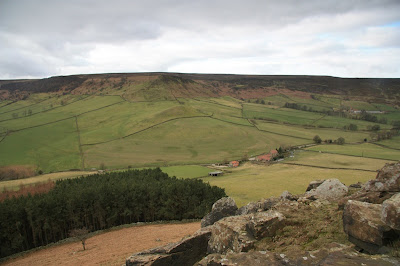 The fairy hill was still clearly visible in the plain below and so I took out my wand and started to focus. 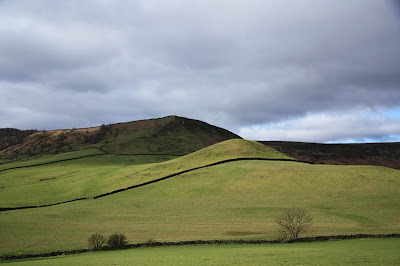 I pointed my crystal-tipped wand directly at the top of the mound and focused upon drawing energy down into the star pattern that I had created.

Immediately a huge column of blinding white light shot down from the sky and entered the crown of the knoll. The knoll then filled with energy. more and more of it, intensifying until the knoll seemed to glow from within. The top of the knoll then appeared to peel away to reveal a huge clear crystal like a column of pure shining quartz . The crystal filled with blinding white light until it couldn't contain the energy any more and then suddenly burst forth beams of white light in all directions. The beams connected this place to other similar places places, filling them with energy and energising the grid.

So what did the vision mean? Was it a vision of the future, or was what I had witnessed actually happening right now, but on another level and another plain to the one we are consciously aware of in our day to day lives? I knew one thing though with certainty, the task that I had been given all those months ago by King Erowyn at Lindsaylands fairy mound was now complete. It felt strangely anti-climactic somehow, I knew I had achieved something, but what? And what next? "Fear of completion" is what Alphedia would have called it, or "being at a loose end" is how I would describe it!

I did some dowsing and was told to return to Scotland to meet the elves there, my job on the North York Moors was now done.