I was intrigued by a story from Kettleness, North Yorkshire of a spring known in folklore as Claymore Well where it was said that the sound of the fairies could be heard at night "beating their bittles and battledores". Research on the internet indicated that the well could no longer be found but I decided to visit the area and investigate some of the nearby springs and pools. If that failed then I could turn to the mysterious Wade's stone which sits nearby, which has associations with the mythical giant Wade and stories of strange supernatural phenomena.

I drove over the moors and parked in Goldsborough Lane just south of the small village of Goldsborough and was drawn to a spot on the map where five trackways seemed to meet. Perhaps this was an important crossroads in times gone by? I set off on foot down the edge of a cultivated field and the first thing I spotted was a couple of hares grazing on one of the grassy verges near the far hedge, they were the first of many hares that I spotted that day.

I continued on towards the crossroads and dropped down over an odd field boundary, like a low drystone wall that had been set into the ground, causing the field I had just crossed to appear like it was on a raised platform. I followed this boundary wall all the way to the crossroads but could not work out its significance, it seemed mysterious somehow, and very ancient.

I passed straight by the crossroads and came to large grove of alder trees on my right that was marked on the map as Stangoe Carr. The ancient, twisted, stunted trees looked somehow mystical and drew me to investigate them further. I knew that on the far side of the carr stood Wade's stone so perhaps I could make a shortcut somehow? I should have known better though, a carr is basically a swamp full of trees and this one was no exception, the ground was completely flooded! 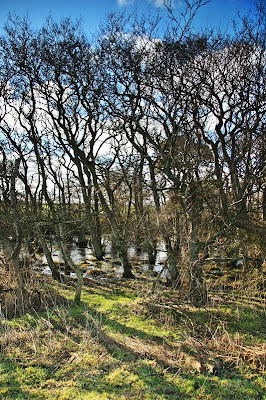 Searching around though I did manage to find a narrow raised causeway heading into the centre of the swamp, so I decided to follow it. Perhaps the causeway had once been traversed by people in times gone by, but now it was completely overgrown with mature trees growing right through it. I had to climb under branches and over roots, scaring many a duck in process, who obviously wasn't used to clumsy humans crashing through the undergrowth! 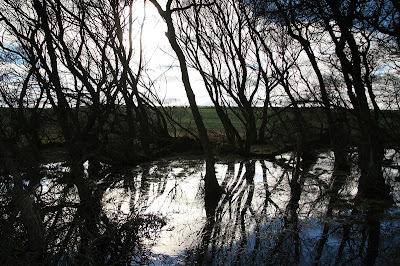 Eventually I came to a point where the causeway sank down into the swamp and nothing lay ahead except open water dotted with trees. 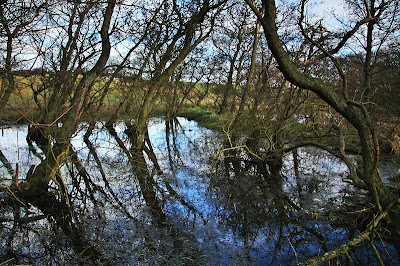 I stopped there and stood in silence for a while, and noticed the intense sound of dozens of small birds chirruping all around me that I had failed to take note of while forcing my way down the causeway. The winter sun beamed brightly through the bare branches of the trees adding a magical aspect to this wild place as I took a closer look the swamp and some of the birds which darted from branch to twig all around me. I noticed that they were pretty, bright yellow little birds called siskins, so I took out my camera and tried to get a shot of some of them. But as I did so a very strange thing happened! I heard a sudden whooshing sound all around me! Directly over my head, to my right and to my left, all at the same time, seeming to come from near and far: "Whoosh! Whoosh-whoosh!" It sounded like the wings of a glider, or a kite straining in a high wind, or a flock of geese flying past at high speed, except that the sound came from all directions at once! It went on for several seconds and then just as suddenly stopped. I was left feeling like invisible beings with batlike wings had just taken off whooshing into the air, disturbed from their secret tryst by my uninvited presence and intrusive camera. Visions of the film "Predator" came to my mind, strange indeed!

But I wasn't afraid, I stood there in silence, half-hoping that the sounds would return, but all I could hear were chirps of the siskins who were still hopping through the branches all around me, singing away as if nothing had happened. Undaunted I continued to photograph the birds, waited a little while longer, and then made my way back out of the mysterious swamp.

I couldn't get through the trees and so I followed the edge of the wood, all along its south side and then the east side until I came to the northern edge of the wood where I could see Wade's stone in the distance, standing alone in a field. It is not a huge and impressive stone, but it does look ancient and weathered, deep channels on its surface telling of the passage of thousands of years of wind and rain as it sat there exposed to all the elements. 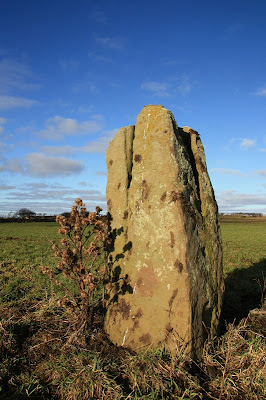 As I neared the stone I thought I heard the strange whooshing sounds coming from the trees again! Could this be the sounds of "bittles and battledores" as told of in the folklore? In the olden days they would wrap newly-washed damp linen around a large rolling pin and sweep across it with a bittle or battledoor in a backwards and forwards motion until the linen was dried and flattened. The bittle was like a long flat piece of wood with a handle, sometimes elabourately carved. Could this produce a similar whooshing sound if passed back and forth fast enough? It was something I would have to try out later.

I walked around the stone several times and then sat down with my back to it, but I didn't experience any of the strange phenomena that other visitors to the stone have sometimes reported, I just got a sense that somehow this stone was drawing energy down into the land.

I headed westward now towards Brockrigg Farm to go looking for the fabled Claymore Well. As I passed by Brockrigg Farm a strange pool on my left drew my attention, but I continued on towards Claymoor House to see if there was any sign of a well around there. There was no-one around to ask so I searched all around the building and the field boundaries but could find nothing, so I decided to return to the pool I had spotted near Brockrigg Farm. The pool looked semi-natural and there was a spring there issuing forth water, so perhaps this was it! I sat down there, closed my eyes and tuned in. 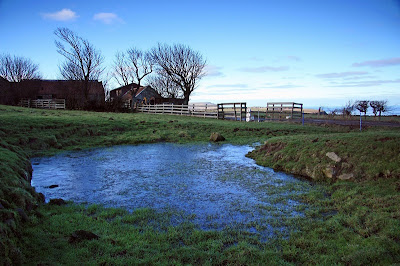 I sensed a presence in the water, and then the hideous face of a hag emerged from the depths! She had sharp, pointed teeth, and hair of matted pond weeds. I tried to talk with her but she was not forthcoming with any useful information. I decided to leave before she turned nasty.

I walked back past Claymoor House towards the sea cliffs and then followed a trackway and field boundary to an old burial mound called Butter Howe. I was intrigued by the name as there were stories of 'fairy butter' from this area. 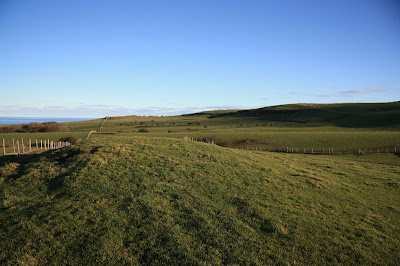 There was an ancient spirit living there in the mound, but he didn't like to be disturbed and he didn't like people tramping over all over him! I assured him of my good intentions and then climbed the mound and planted my wand on the summit, drawing down energy into this sacred place.

I explored some more of the local landscape features and then returned to my car. What had I discovered today? The strange sounds of "bittles and battledores" I now believed came from the swamp and not from the well. The sound was said to have been heard for "miles around", so did it necessarily have to come from one particular spot? And was it the fairies making these sounds, or something more sinister? Weren't all strange supernatural beings at one time described as 'fairies' anyway? I truly believed that I had had a close encounter out there in the swamp, but with what? Well whatever they were they did not reveal themselves to me at this time so that, for now, would have to remain a mystery.