Folklore states that in Baysdale in the North York Moors there is a spring where the fairies wash their 'fairy butter'. I did some research on the internet and found out that fairy butter is a kind of fungus, it gets it's name from the fact that it seems to appear miraculously overnight on gate posts and fences and looks like a blob of butter that the fairies have been throwing at each other during the hours of darkness. 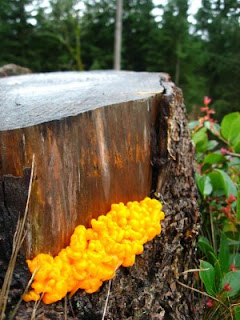 Baysdale lies in a forgotten corner of the North York Moors, it is accessible only by a farm track and it is all private land, there are no public facilities, not even a layby to park in. I realised that my presence there would arouse suspicion from the local farmers so I tried to make myself as inconspicuous as possible, parking behind a low mound on the entrance road that led down into the hidden valley.

I walked down the hill and headed for the cover of the nearest forest and soon found myself in a magical birch wood. It felt like a very high energy place, almost untouched by the outside world. I stood in a clearing in the birch forest and communed with the birch spirits there; tall, thin, sticklike beings that peeked out from behind the trees. I sent them healing with my wand but also soaked up some the magical energy of this place for myself too. The birch people thanked me and said that if I ever needed their help, all I had to do was find a birch tree!

I walked up onto the moor behind the forest and found some boggy springs seeping out of the ground there. I had no clue as to where to go but I knew that this wasn't the right place, the spring I was looking for would probably be gushing out of the rocks, not seeping out of the hillside. It would be the kind of spring that people in the past could visit and fetch water.

I continued walking around the edge of the dale until I reached the far end, and then headed back down into the dale through a conifer plantation. Soon I could hear the unmistakable sound of trickling water. I followed the sound through fallen trees and low-hanging branches and eventually found its source, bubbling forth from between some rocks. 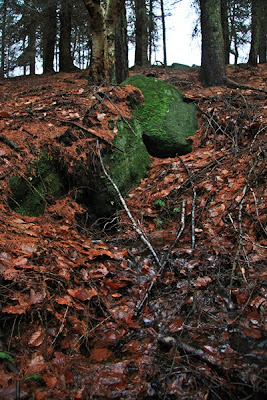 Although it was heavily clogged with fallen leaves I instinctively knew that this was the place! The withered trees growing out of the rocks nearby and the odd birch tree still clinging on to life gave clues as to what this place must have looked like in the past before the conifer plantation grew up; and despite the darkness created by those suffocating trees looming overhead it still held some of its ancient magic. 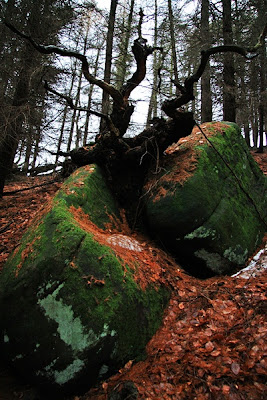 Immediately above the spring I could see tiny caverns sheltered under overhanging boulders. I was drawn to go and inspect them closer and then sat down by one of the entrances and meditated. I took out my wand and pointed the crystal into the hole and send healing rays deep down inside. 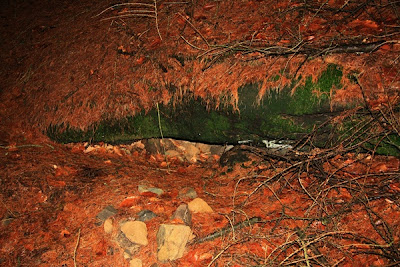 After a while small, shy faces peeked out of the holes. They belonged to tiny creatures about 8-10 inches tall with brown skin, long pointy slanted eyes, and long pointy brown ears. They stood on two legs and wore simple rustic clothing.

I planted my wand into the ground before me and the crystal on its tip glowed. Cautiously the little 'boggles' crept out and formed a circle all around me. Then they linked hands and formed two concentric circles facing me in the centre and started to dance; one circle dancing clockwise while the other circle danced anti-clockwise. They sang:

They seemed to be performing some kind of festive ritual or celebration. I felt like it was time to reveal my true form as Aurvandil, the faery lord in glowing white. They stopped dancing and stepped forward, they seemed to want to touch me in awe, like I was some kind of living god.

I told them that they didn't need to hide anymore, their time was come, they could spread out now and meet with others of their kind. Once they'd all touched me they slowly melted away into the rocks and undergrowth from where they'd come.

I picked up my wand and wandered back down to the spring. I peered into the water and there it was, fungus! Fairy butter! 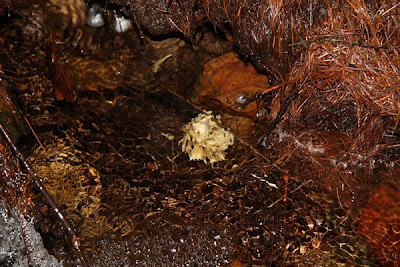 I had never seen fungus under water before, I didn't even know such a thing was possible! I picked up the fungus, it wasn't attached to anything. Had the fairies been washing their fairy butter? For what strange purpose did they perform this task? That would have to remain a mystery, but I was more than happy to find this confirmation of my quest. 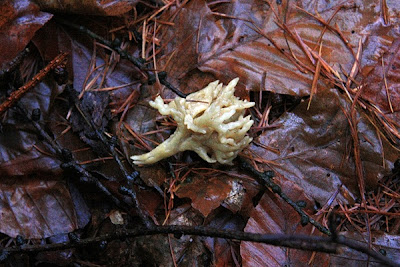 It was very interesting is it true?Anyone who likes fairies or leprechauns they should watch the movie The Magical Legend of Lepravhauns A fabulous tale of love ,war and magic

Is which part true?