Long ago a farmer in Farndale on the North York Moors was being much disturbed by a malicious hobgoblin or hobman. Not able to bear the malicious pranks of the hobman anymore the farmer eventually decided to quit his farm. He packed all his belongings into a cart and set off on his way, but before he got far one of his neighbours asked him where he was going.

At which point the butter churn suddenly opened up and hobman's head popped out.

Realising the hopelessness of his situation the despondant farmer returned home to his farm.

This short tale has parallels in other parts of the country and in Scandinavia too, but this particular hob, the Farndale hob, was associated with a myserious mound of stones up on the moors called Obtrush Rook, or the Hobgoblin's Cairn, which is made up of the remains of an ancient burial cist. 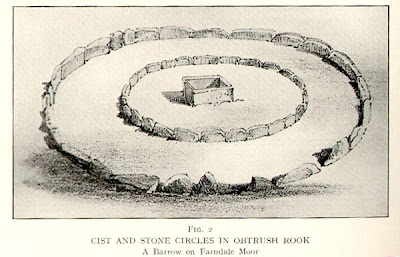 Intrigued by the story I decided to try and visit this almost completely forgotten location and see what power, if any, the place still held.

I drove to Farndale and parked in a narrow country lane by a nearby farm called Kneysbeck. The start of the climb followed a public footpath past an ancient spring that flowed into a stone trough. 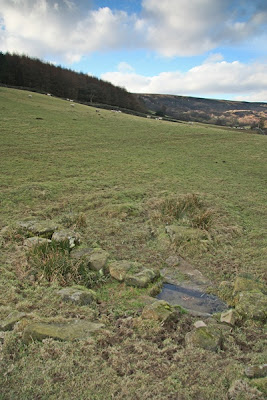 It then continued up the hillside through some woods before emerging into an old overgrown country lane that ran along the back of the cultivated valley. 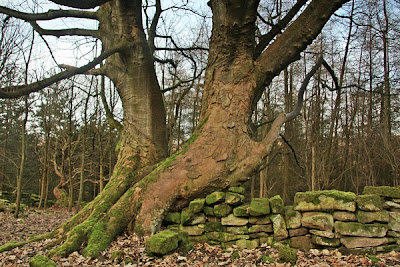 Here I left the public footpath and followed the old lane for a while before it too became little more than a track, heading up the hillside onto the high moors. The trackway passed through hidden gulleys tucked away into the hillside and provided magnificent views over Farndale, now far below.

Using my compass and various landmarks I determined when the path had reached its nearest point to the fabled cairn and then set off on foot over the heather, leaving the trackway behind. It didn't take long struggling uphill before I could see the top of the ridge far ahead of me, and there, almost directly to my front, sat the cairn! There were some other piles of stones further over to the right, but I was sure from my calculations that I had the right place, and the closer I got the more certain I became, this structure stood alone near the very summit of the ridge.

As I got closer the stones took on a rather forbidding aspect, I did not feel invited or welcome, so I decided to start by walking around the stones sunwise. Not only could this be taken as a sign of respect but it also gave me chance to familiarise myself with the location. There seemed to be an outer circle of stones surrounding an inner pile, as well as one section on the outside that seemed to have been formed up into wall or shelter of some sort. 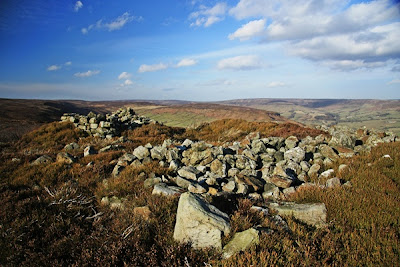 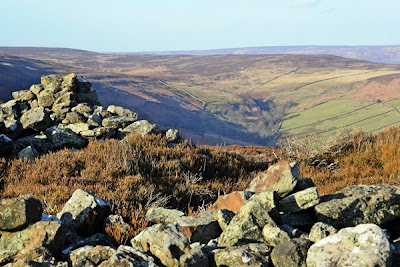 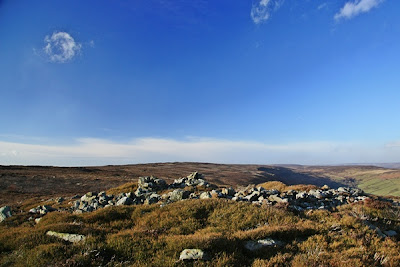 As I'd read about previously, I noticed that many of the stones were cup-marked, but whether this was natural or carved by the ancient hand of man was hard to tell. 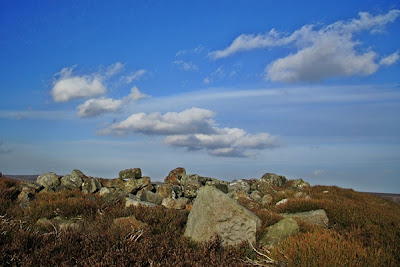 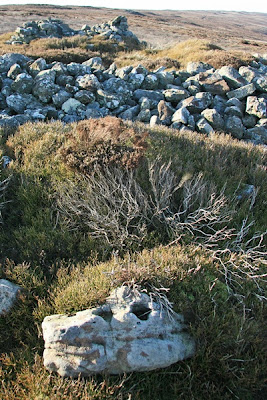 After processing around the stones three times I stood by what I took to be the entrance and asked permission to enter.

As I closed my eyes I could see a vision of the hobgoblin standing in the centre of the stone circle. He was larger than me and demonic-looking with an unfriendly aspect, he did not want to be disturbed!

As a further sign of respect I placed a scallop shell by the entrance to the mound and filled it with honey.

This got him more interested. He realised now that I wasn't just some hiker come to disturb him, I was here for a purpose!

I produced a large quartz crystal from my bag. He told me to leave all else behind and enter with my crystal, so I dropped my bag and stepped forward.

I was apprehensive and didn't really trust him, but he let me walk right into the centre of the cairn. I stood on the mound of rocks in the centre and placed my crystal there, down amongst the rocks.

As soon as I did so a huge and powerful column of white light shot down from the sky! It filled the cairn with its energy and caused the whole cairn to glow, before slowly issuing forth from the cairn in all directions down snakelike pathways down across the moors. I was filled with the light and energy and could see these glowing pathways all around, slithering away like white-hot molten glass in all directions, being carried far away across the moors.

In my mind's eye I followed these trails and saw them emerging as the light of sparkling stars in bubbling springs. Springs all over the moors were filled with this energy! The energy poured forth from the edges of the moors into the rivers to be carried by them across the plains. Lake Gormire too I saw sparkling with this new energy. The springs had been energised! A new magic was issuing from them to be carried far out across the land.

Finally the column of light subsided but now I too was transformed. I stood there as Aurvandil, the luminous wanderer, in white silken clothing with crystal pendants and silken hair of yellow gold. A fairy maiden appeared before me with a long flowing green dress and flowing hair of reddish blonde. Who was she? Was this Queen Mab my fairy guide? She told me that I had done well and that the first stage of my quest was now complete. She told me that I was on my way to receiving my prize and then she stroked me seductively.

I opened my eyes and the vision was gone. I am done here.

I returned to the bottom of the hill and passed by the spring again. I noticed now that the water in the spring was no longer flowing. Odd, I thought.

Back at my car I took out a pair of newly acquired dowsing rods and thought that I would give them a go as I'd never tried dowsing before. I walked back up to the woods and found a suitable clearing and stood there with the rods pointing directly forward. 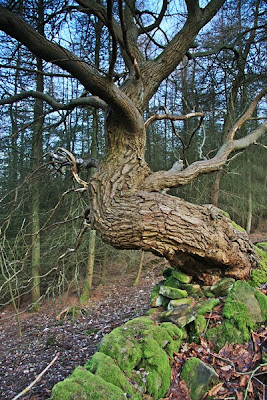 The results astonished me! Whenever I asked for a positive response the rods crossed over strongly into an X as if guided by unseen hands. The nearest thing I can equate it to is a Ouija board where the glass seems to move itself. I tried dowsing for underground water and almost immediately found a vein of water, and then when I found an underground spring the rods crossed over violently.

"Was that the wind!" I said to myself.

The rods immediately swung outwards in a violent negative response! OK, now I was convinced... This was the nearest thing to magic I'd ever experienced.

I asked the rods if there was anything else to discover here, but the rods fell silent.

I later realised that the location I had discovered, the hobgoblin's cairn, was the omphalos, the very spiritual centre, or navel, of the North York Moors. By energising it's centre I had effectively energised the whole of the moors and carried that energy outwards and beyond, into all the land around.

I am going tomorrow, I have never paid attention to the energy of the land but I will be as receptive as I can!