The Hobgoblin of Hobthrush Hall

Yorkshire folklore tells of a cave in the scarrs above Over Silton on the edge of the North York Moors called Hobthrush Hall which was said to be the home of a local Hobgoblin. I checked the small scale Ordnance Survey maps around Over Silton but could find no indication of a cave, so all I had to go on was the following piece of local folklore:

"Over Silton. In the precipitous cliffs, a short distance north-west of the village, called 'the Scarrs,' is a cave in the rock, known by the name of Hobthrush Hall, which was formerly the abode of a goblin of somewhat remarkable character, who appears by the stories yet current relating to him, to have been possessed of great agility, as he was in the habit of jumping from the hills above his dwelling to the top of Carlhow Hill, about half a mile distant. He was not of the malignant kind. . . . On the contrary he was one of those friendly to man. . . . The Silton goblin was a true and faithful servant to a person named Weighall, who kept the village inn, and rented the land on which his hall was situate. It was Hob's invariable practice to churn the cream during the night, which was prepared for him the evening before, for which his reward was a large slice of bread and butter, always placed ready for him when the family retired to bed, and always gone in the morning. One night, the cream was put into the churn as usual, but no bread and butter placed beside it. Hob was so dis- gusted with this piece of base ingratitude, that he never came to churn more, and appears to have entirely left the neighbourhood. His dwelling yet remains, a rugged cave among the rocks, dark, wet, and uncomfortable, but extending a considerable distance underground."

Carlow Hill was just to the West of Over Silton and there appeared to be 'scarrs' or cliffs just to the north of the village, so that seemed like a good place to start looking.

Parking was incredibly difficult as the lanes around there were very narrow but I did manage to find a small layby just to the north of the village that was on the other side of some fields that sat above the scarrs. I didn't fancy climbing over the barbed wire fences and upsetting the local farmers so I opted to skirt around the fields and enter the woods to the north of the scarrs.

I plunged into the trees, heading down a slope, and soon found myself at the base of the cliffs at their northern end. It was then just a matter of tracing the edge of the cliffs southwards until I came across a cave! The cliffs stood at the top of a long steep slope but were clearly visible through the open woodland of spruce plantation. 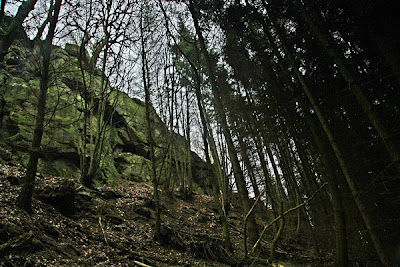 I had no idea what the cave looked like though, how big it was, and even if it really existed! So imagine my surprise when I suddenly spotted two very obvious looking caves in the cliff face! 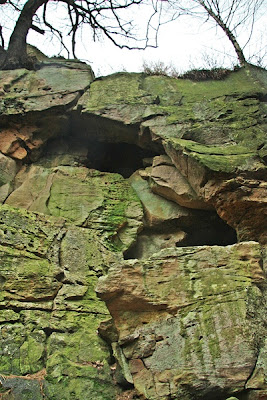 I scrambled up to the entrance and old graffiti carved all around confirmed that this must be a significant place. A place once often visited, but now forgotten. 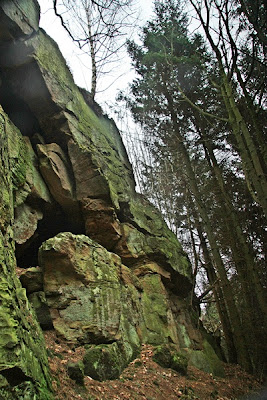 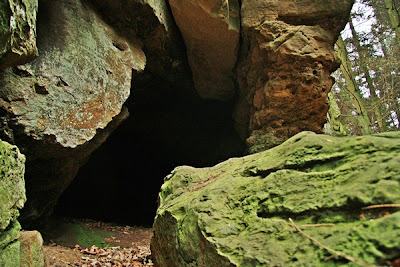 I stepped through the small entrance and entered a much larger area inside. This was definitely the right place! Hobthrush Hall home of the Hob! 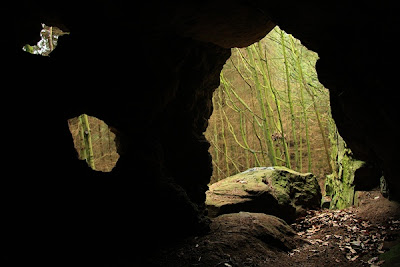 I searched around the inside of the cave and then followed a small passageway at the back which became smaller and smaller until only a hob could have fitted down it! Tantalisingly a tiny tunnel about a foot high seemed to lead deep into an underground realm but unfortunately I was too large to explore any further myself, so I left an offering there to the spirits and the hob. 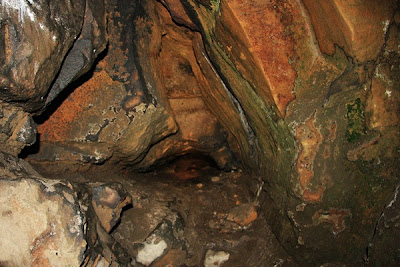 But I wasn't done yet, as I crouched down in the tiny tunnel I noticed a cavity above my head which might just be large enough for me to squeeze my head and shoulders into if I stood upright. Slowly and gingerly I forced my head up into the tiny cavity, past spiders webs and cocoons until my head torch shone into the small cavity above. There were big shiny black spiders living in every crack and crevice in the rock, as well as other insects which were hibernating from the winter cold. 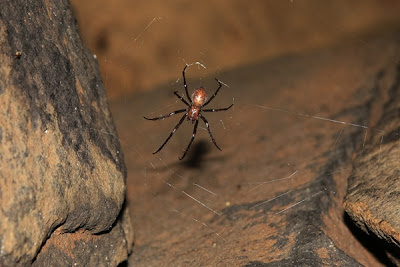 I didn't fancy poking around in there so I dropped back down into the tunnel and returned to the main cave. I had been feeling rather drained for days so I decided not to do any spiritual investigations today, the energies here seemed particularly heavy in any case. I had a slight headache and so I decided to content myself with my discoveries so far.

I left the cave and started heading back towards Over Silton through the woods. I hadn't got more than a hundred yards when I found my way blocked by a fallen oak tree which I had to duck under. For some reason I removed my wooly hat to do this and was astonished to see a large moth clinging to it! It was one of the largest and most beautiful moths I had ever seen, with a marbled pattern its back and long feathery feelers sprouting from its head.

I stared at it for a while and then tried to make it fly off by giving it a gentle nudge, but the moth clung firmly to my hat. I nudged it a couple more times but it just wouldn't budge. I was feeling tired but I knew he must have a message for me.

"Go back to Hobthrush Hall!" said the moth.

The moth's feathery antennae twitched and they both pointed in the direction of the cave. This was a message I just couldn't ignore! Resigned to my duty I decided to climb back through the undergrowth to the cave. I tried to get the moth to leave my hat by transferring him to the branch of a tree, but he held firm. I would have to hold my hat in my hand and take the moth with me!

I re-entered the cave, placed my hat at the far end by the small tunnel, planted my wand in the centre of the floor to draw in energy there and then sat down by the cave entrance to meditate. Soon after I sat down the moth flew up into the cavity and disappeared into the darkness! I took this as a sign to explore the cavity further which I'd been unwilling to explore earlier.

I returned to the small tunnel and noticed what looked like a hand print of white powder on the wall below the overhead cavity. I then climbed up and poked my head through the cavity, bolder this time and less afraid of all the spiders that lay hidden around I climbed up as high as I could and shone my torch into every little crevice.

This time I spotted curious formations in the rock, pieces of fossilised wood and strange 'egg stones' like the ones I had seen on Roulston Scar, except these ones still had their filling inside, a strange red clay-like material. I just couldn't imagine what these curious eggstones could be, they must be millions of years old! 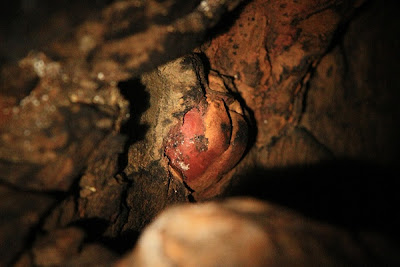 My interest piqued I decided to explore more of the cracks and crevices in this cave to look for similar eggstones and indeed I did find more, just to the left of the cave entrance, while overhead I noticed what looked like a large fossilised beam of wood! Thoughts of ancient civilizations lost in mists of time came to mind, strange worlds millions of years old which today we can have no concept of.

I noticed that the end of this particular crevice was blocked by a couple of boulders, each almost a foot across. It almost seemed like they had been placed there deliberately and so I decided to remove them to see what lay behind. As I removed the last boulder I got a shock!

"Oh my God!" I said, because the boulders were hiding a tiny little doorway, only a couple of inches high! At that moment I knew I had found it at last, everything had been guiding me to this very place, the entrance to Hobthrush Hall! 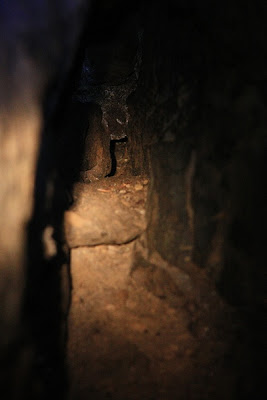 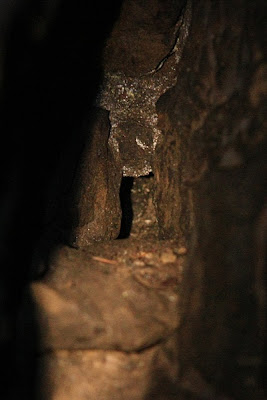 The passageway was very narrow and even with my arm fully extended I could not reach the tiny doorway. As I shone my torch down and took photos of the doorway I felt a sudden rush of energy shoot out from it and was overcome with dizziness! I quickly fell back into the main cave before I passed out completely!

"I don't like all those lights!" shouted the hob from behind the tiny doorway.

"I'm sorry, I'll switch them off and I'll put the rocks back to hide your home again, I promise!"

I was nervous now, I had felt his power! So I replaced the rocks and left an offering of honey there for him.

"I thought you sent the moth to fetch me?" I said.

"I did, but I don't like all those lights!" He was a grumpy sod.

"Will others come?" he asked.

"Yes, but they'll treat you with respect, I promise!"

"Will they bring honey too?"

The hob was a powerful spirit. In the past he would have been treated with respect but nowadays so many of the hobs' haunts are overrun by tourists and so the hobs retreat underground, far from the eyes of mankind. This place was still relatively untouched and so the power of the hob was still strong. I hope that anyone who decides to visit this place will treat the hob with the respect he deserves and leave a small offering for him in the cave.

I picked up my things and left, but then I remembered that I had left my hat lying there. I popped back in to grab it and I heard the voice of the hob one last time.

"Thank you", he said simply.

Thank you for the informative story. Hobbrush Hole is marked on the old 6 inch maps of Over Silton, which can be accessed via the National Library of Scotland archives. I'm posting a link here, I hope it leads you there: