On a cold and misty day at the tail end of the year I drove to the quant little moorland village of Cropton and parked my car up by the old church of St. Gregory's. 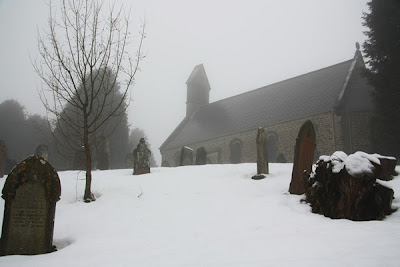 I had been drawn to Cropton by the following piece of folklore:

“About the middle of the eighteenth century the people of Cropton were sadly troubled by "a company of evil water elves having their abode in a certain deep spring at the high end of that village," and in order to rid themselves of the sprites, a most heathen ceremony was conducted at the spring, "three wenches" taking a prominent part in the proceedings which are quite unprintable.”

After scouring a map of the local area I settled upon the Lady Keld Spring as being the only likely location where this "heathen ceremony" could have taken place.

The mist hung heavy over the land as I trudged my way down through the snow-laden woods behind the church. I was following an ancient pathway that monks and pilgrims had once used on their way to visit the magical healing waters of the spring.

The air was silent and mysterious and I passed further and further down the hill, through woods and fields, until finally I could hear the sound of trickling water in the trees ahead of me, just over a barb-wire fence.

As I stepped over the fence I could feel a sudden change in the energy, from the heavy stillness of the fields and woods to the crisp fresh energy of the springs. The air was buzzing and alive!

As I stepped forward I could see a central rivulet that was being fed by many small springs all around, causing a lively flow of water to pass through the deep snow.

I knelt down and left an offering there by water, and suddenly found myself saying:


"Fair maidens of the Lady Spring,
A humble gift I for thee bring,
With words of hope and healing hand,
I call thee forth across this land!"

Where did that come from?! I'd never been much into poetry...

I decided to follow the rivulet upstream, as clearly there must be more springs above that were feeding it. The snow was deep but the spring water was cutting through it to leave dark patches in the snow wherever a little spring or rivulet appeared. Despite the ice and frost all around this lively water didn't look like it was about to freeze up anytime soon.

Eventually though I came to a large frozen pond. 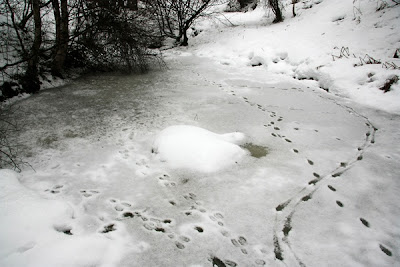 It seemed like a significant place and so I drew forth my wand.

The quartz crystal on the tip of my wand shone, casting a halo of white light all around it. The halo spread out until it was several yards wide and I then swept the edge of the halo over the frozen surface of the water until eventually the crystal itself was pointing directly into the heart of the pool. A shaft of pure white light beamed out from the crystal and penetrated the ice, entering the water's hidden depths. Energy was being tranferred into the water, creating a vortex.

I could see small glowing creatures about a foot long flitting about under the ice, anthropomorphic figures with mermails tails; water sprites? They swam from the edges of the pool towards the vortex in the centre and seemed to swirl around, bathing in the energy.

I now felt like I needed to anchor this energy, but my wand would not stick into the ice, so I stuck it into a small patch of turf in the pool instead. I felt red fire pass from wand into the earth.

Walking around the pool I discovered that the rivulet continued even further upsteam, so I followed it until I came to another pool. This pool was not completely frozen over like the first one but was matted with bright green pond weeds. 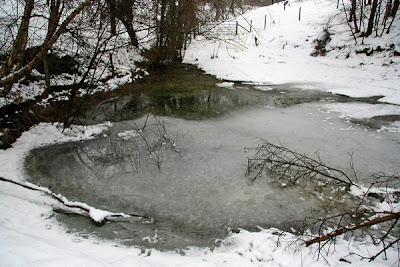 I drew forth my wand and prepared to repeat the process I carried out on the first pond, but this time the result was quite different!

Three beautiful naked women emerged from the water. They beckoned me in a tempting way, but occasionally I would catch a glimpse of them looking like old hags, with sharp pointed teeth and pond weeds in their hair. Were these the "Jenny Greenteeth" of folklore?

I sent white healing light towards them with my wand. I saw their shadow sides being driven out and sent skyward. Had I dispelled these evil spirits? The now beautiful nymphs approached me and started stroking me. 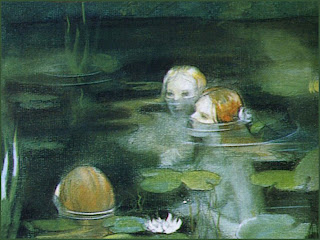 I could still see flashes of evil in their eyes but they were beautiful and tempting indeed! They led me into the water and then slowly down under the water to their watery home. At the last moment I snapped out of it and broke free! I swam back to the surface and climbed up onto the bank.

One of them tossed me a golden ring which I caught in my hand. They said that the ring would protect me so I placed it on my finger. Did this mean I could use it to call up the water nymphs in future?

I was left wondering as I walked back up the hill towards the village. Did I just have a lucky escape or was Aurvandil immune from such human failings? It was certainly an interesting experience in any case! And I seemed to be doing good work bringing the energy of the water sprites back into the land.

Back in the village I paid a visit to Cropton's other famous water supply, a 300 ft deep well in the centre of the main street. 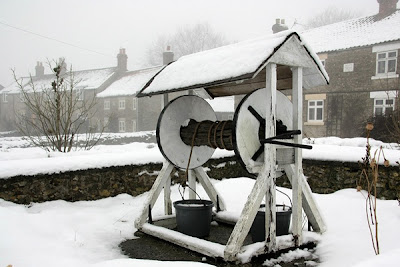 Did this well too have sprites and magic lurking within it? I didn't detect anything at this time, and in any case the local villagers were eyeing me suspiciously so I wandered back to the church. I had a look around inside and found a leaflet about the nearby crypt beneath the church at Lastingham, an ancient sacred site full of old Saxon and Viking stonework and said to be the centre of many Ley lines and strange phenomena. A place I would soon have to visit of course!

By this time twilight was fast approaching and something drew me back to the medieval trackway beside the church. I was sure that there must be Fae associated with this place. Behind the church was an old Norman motte which I had missed earlier. I walked up and climbed it and then from the top gazed out into the mist. I half expected the Fae to appear from twilight at any moment, but I saw nothing.

I wandered back across the field beside the motte and soon found myself walking back through the woods towards the Lady Keld Spring. I crossed the barb-wire fence and the fresh air and energy of the springs hit me again! What a difference! One side of the fence heavy and still, the other side sparkling with energy!

I stood with my feet on either side of the rivulet, soaking up the energy of the place, letting it invigourate me! The trickling water passing beneath me and the sparkling energy electrifying the air all around me. I closed my eyes and suddenly found myself gushing in rhyme again!


"I come to thee to set thee free,
Along the road to what may be,
I've travelled down to misty dell,
To learn the secrets of the well,
To take them with me far away,
To use in earnest one fine day!"

Not prize winning poetry by any means, but how was this coming spontaneously to my lips without me even thinking about it?

As I pondered this I was startled by a sudden sound! I opened my eyes and saw two roe deer leap over the barb-wire fence just feet away from where I had crossed it. They landed just a few yards from me and sniffed the air. They hadn't seen me! I stood perfectly still over the stream in the twilight, hardly daring to breath. My leg started to cramp up as I watched the uncertainty in the deer's face. She had sensed something but she wasn't sure! We all stood there in perfect silence until the lead deer suddenly made a decision and started to walk, straight towards me! At the last moment she noticed me and almost leapt into the air! She shot off in the other direction as fast as her agile limbs would carry her!

At last I could relax. What an experience! Well I hadn't seen any Fae but if anything this had been just as good! Nature was truly as magical as anything the Fae had to offer!

As I walked back up the hill in the darkness the doubts started to creep in. Maybe I had missed an opportunity? Maybe this animal wanted to communicate with me? I had been been too overawed to think about it at the time though. As I stepped back into the forest owls hooted at each other in the darkness. No, nature goes on regardless of us I thought, our concerns are not theirs.