My friend Trina had told me about a famous pagan site in Fife called Dunino Den where once the druid's had made their sacrifices. So as I was in the area I thought I way as well pay a visit.


I parked my car by the main road and started walking through the woods. Right away I found a discarded candle lying on the path in front of me! I took this to be a good sign! I followed the path through the woods, following the edge of a gully until I came to an old church. The turning right away from the church I walked down through the woods towards a deep gully.


The first thing I came to was a small circular pool at the top of a small cliff. 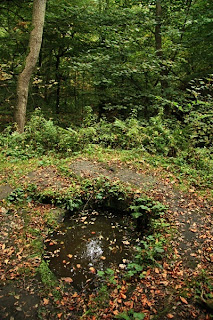 I sat by the pool and meditated there. After a while I felt a great urge to thrust my hands into the cold water. As I did so, wondering what I was doing...


I suddenly felt like my hands had gripped the hilt of a great and majestic sword! I drew the sword from the water and was amazed to see it's shining blade and golden cross hilt studded with glittering gems!


It was an etheric sword which I could use in the spirit world. Months earlier I had sacrificed a real sword into a river. Perhaps this was what I was getting in return?


I left the pool and then walked down the so-called 'fairy steps' and into the druid's den itself. 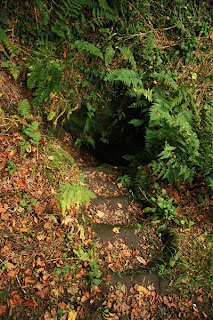 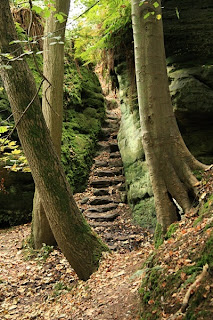 The place looked absolutely magical, a woodland glade hidden away by tall cliffs and bordered by a lively little burn. 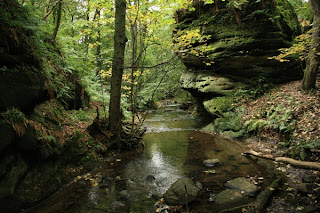 The centre of the clearing was dominated by an upturned tree-stump inscribed with runes and being used as an altar. 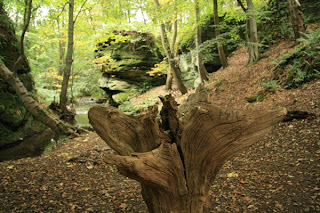 All around the clearing people had left offerings of colourful beads, flags, ribbons etc. 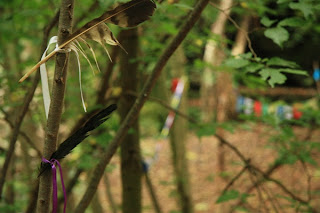 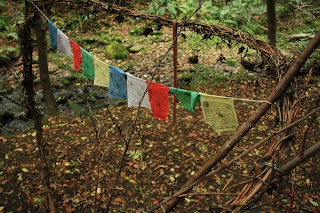 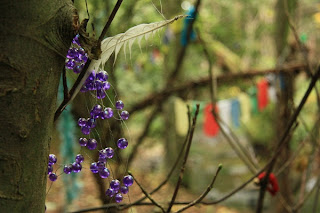 The rocks around the clearing had been adorned with Celtic crosses and other strange carvings, while every small crevice seemed to contain an offering of a coin or a shell. 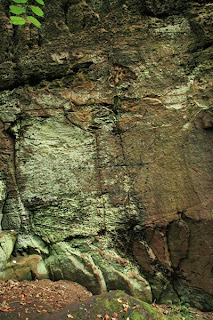 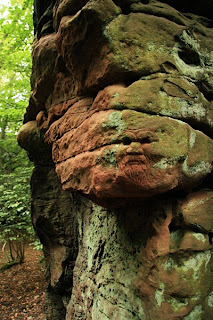 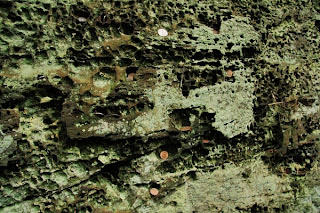 At the base of one of the rock faces I found a tiny cave, only big enough to crawl inside on my belly. 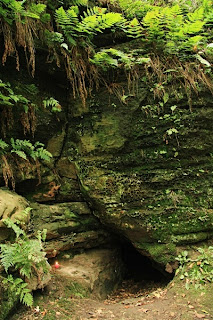 Once inside, the cave opened up a little and I was able to twist around and look up into all the small crevices in the ceiling. They were filled with big shiny black spiders, black millipedes, midges and moths! I lit a candle in there and lay down to meditate, I started to see some small red-capped creatures, but the midges were bothering me so I batted them away with my hands! Mistake! I don't think they liked that at all! I would have to learn to respect all creatures no matter how small and bothersome! For all I knew they could have been fairies that I swatted!


As I lay there I heard a deep rumbling sound. Was it an airplane passing by outside? Unlikely, as it seemed to go on and on, but I was too tightly wedged in to nip out and check. However I felt like it was time to leave this claustrophobic place so I squeezed my way out, and after making another tour of the clearing and its surroundings I headed back to my car.