Alphedia had a message for me from spirit: "Visit St. Fillan's cave on tuesday!" Neither of us knew where it was or what it was so I looked it up on the internet and found out that there was a St. Fillan's cave in the small town of Pittenweem on the southern coast of Fife, Scotland.


I put it off for a week or two but eventually I made my way up there on a tuesday and discovered the cave entrance. 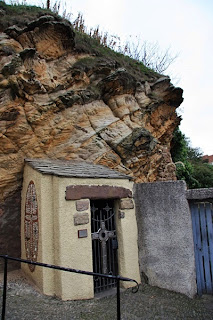 It was barred by a heavy iron gate emblazoned with a huge iron Celtic cross and it was inset with pieces of red hematite (iron ore)! My first impression was "Wow! Whatever is in there they REALLY don't want it getting out!" And what is it that is repelled by iron? Why the fairies of course!


I found out that the key was kept in the local chocolate shop, so I went to fetch the key, let myself in and wandered into the strange cave. 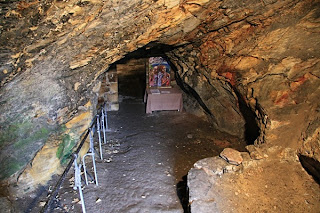 Near the entrance was a painting and story about St. Fillan, but deeper inside the natural sea cave had been converted into a chapel with an altar. 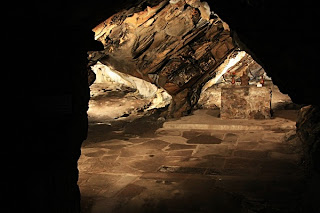 In the past the cave had seen all kinds of uses, from a smugglers cave to a prison for witches, but it is most famous as the place where St. Fillan hung out while he was converting the Picts.


I was disturbed a couple of times by tourists wandering in so eventually I decided to switch off the lights and lock them out. It certainly added to the atmosphere!


With my torch I found another gate... 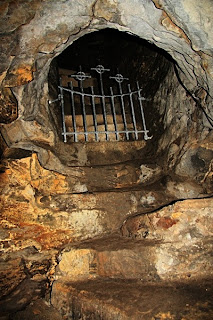 which led to a 'secret' passage... 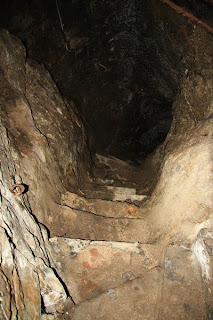 around to another gate at the back. 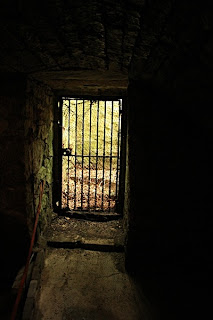 Again it was barred with iron and locked! So I returned to the chapel and left an offering on the altar... 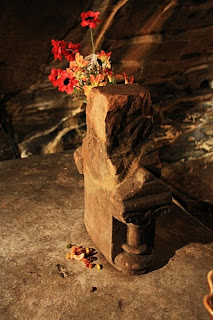 before crawling into the dark recesses at the back of the cave to meditate. 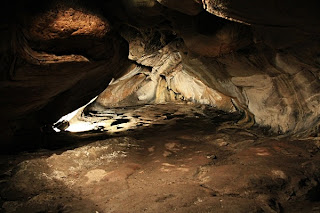 This cave is an entrance to the underworld. Spirits which were once able to roam in and out freely have now been imprisoned here. I told the spirits not to be afraid and to follow me outside, but they were terrified of the iron gate. I literally had to lead them by the hand, one by one, past the gate, so that they could be free.


While in the back of the cave I noticed a small dripping spring of water which created little flowstone pool which would make an excellent scrying mirror... 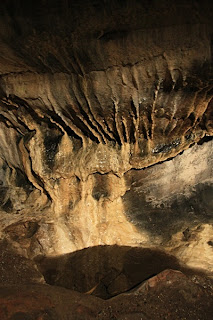 but I felt like my job was done here so left I left the cave and returned the key to the chocolate shop. Then a bizzarre coincidence! A woman I'd met on several of my recent spiritual courses was sitting in the chocolate shop drinking hot chocolate! What were the odds of meeting her in this cafe in this remote little town at this exact date and time? If there was any significance to this I have yet to work it out! But by this stage I was no longer getting shocked by all the odd co-incidences, which was just as well, for there were to be many more!

In hindsight maybe I did the wrong thing in releasing these spirits? I was a complete amateur at this stage and didn't really know what I was doing, but all I can say is that at the time felt right.

How are those Spirits going to get back inside past the Iron without you to help them? Perhaps there was a good reason for their "imprisonment" not all Fairies are sweet benevolent beings!

You're right, and that's something I learned later...

Hi there Aurvandil! What a great post! Thank you. I'm here writing about witches in the UK in a fiction book and kept wondering about that cave, had there been 'witches' imprisoned there.
Would you be willing to correspond with me via email about such? My email address is sfmarlow @ mindspring.com