I went for a walk one evening down Combe Hollow, in the woods near Compton Dundon, Somerset. There I found some badger sets covered in old vines, with many trackways used by the badgers radiating out in all directions. 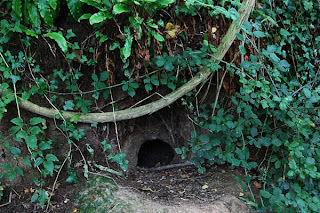 I walked around the woods until dusk and then was drawn to an old tree stump down a steep slope in the bottom of the hollow. I scrambled down to inspect it and then sat on top of it meditating. What had drawn me here I wondered? I walked around the tree stump several times until I noticed a hole at the base of it, I peered inside the hole and deep inside, at about arm's length was wedged a plastic bottle! How did that get in there? I reached inside and tried to pull the bottle out but it was firmly wedged in, I wriggled it around and pulled harder and finally it came out. It was clear that it had been there for a long time.


So what was the point of that? I sat there looking at the tree stump and wondered... and as I sat looking small wood wasps started to fly from the hole which I had just made. First one or two, and then dozens of them! I panicked at first until I realised that they meant me no harm! It's strange but there were definately no wasps here when I had first inspected the tree stump. Had I released them? I certainly sensed that they felt happy to be freed. It reminded me of the fairies I had released while up in Scotland. What strange compulsion had led to me this remote tree stump to free these wasps, and what significance did it have?


As I walked back in the near darkness, pondering these thoughts, I heard some snuffling in the undergrowth. I stood stock still and after a while a badger appeared on the bank right opposite me. We stood staring at each other for while and exchanged greetings. He didn't have much else to say so we moved on...