While up in Dumfries and Galloway I visited one of the local cup & ring marked stones. 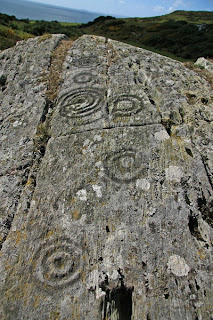 As I sat by the stone I had a vision of Neolithic people grinding these grooves by hand using a rounded rock, and as they did so they were putting energy into the land at a point in the distance. Once they had carved the central cup then they amplified its power by carving the ring marks around it. New cup marks had to be created each time they performed this ceremony, which explained why there were so many of them covering so many rocks.

I later discovered that many dowsers hold the same belief, that cup-marked rocks somehow transfer energy from points of power to where it is needed. Dowsers have been able to follow these energy lines and find features on the landscape that correspond to the cup marks.