I heard about St. Ninnian's cave from Damh the Bard at the Artemis Gathering. "It is said you can hear the voice of God in there," he told us, "and it's true!" Intrigued I decided to pay a visit, so on my next trip to Scotland I took a detour to Dumfries and Galloway. 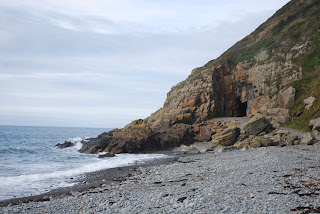 Unfortunately I arrived there at the worst possible time. Once a year the local bishop holds a service in the cave and as I arrived they were just setting up the marquee and stage! I wandered inside the shallow sea cave anyway and had a look at some of the old rock carvings and christian offerings that had been left there, and after a while the people setting up the stage wandered off, so I had the place to myself at last.


As I lay down in the back of the cave the hooded form of a monk entered. It was St. Ninnian! He had come here to explain to me the true meaning of 'Christ consciousness'. He said that attaining Christ consciousness is the realisation that we are all spiritual beings and that matter as we perceive it is not real. The Christian cross is the symbol of this, it represents the death of the physical body and awaking to the realisation of Christ consciousness. The crucifixion of Christ was simply an allegory showing that Christ rejected his physical body and embraced totally the spiritual. The early Celtic church were aware of this, and did not take the bible literally as people did later on.


It was quite a revelation and made me look at Christianity in a whole new light. People have a terrible habit of taking allegorical tales literally and this has caused so much strife and confusion over the centuries. Once we understand that everything is spiritual, and that the material world of our five senses is just an illusion, then we will realise that no religious texts should be taken literally, we should always be looking for the deeper, spiritual meanings behind them.