Hood Hill juts out from the edge of the North York Moors and makes an imposing sight when viewed from cliffs above Sutton Bank. 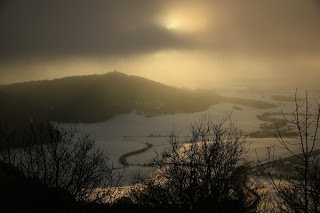 Legend has it that the Druids used to make sacrifices on an altar atop Hood Hill, but now somehow I felt drawn to the place.


I parked near the bottom of the hill on a cold December day and headed up through the conifer woods using my intuition to guide me in the right direction. I scrambled uphill through the trees until I reached a small clearing about halfway up the hill, and there I found what looked like an altar stone. 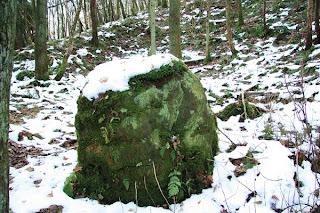 I left an offering there and tuned in...


I was met by a faery guide who told me to continue up the hill.


I made my way up through the rest of the spruce forest until I reached a more open area on top of the hill. This was more natural with oak trees dotted around waiting like sentinels for the time to come when they could dominate the land again. I gave them healing and put my intention out there they would grow strong and repopulate the land below. 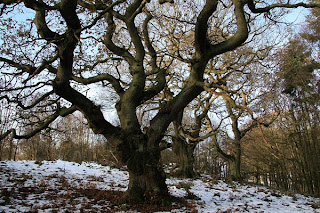 I continued along the ridge until I approached the highest point on the hill where ancient earthworks were marked on my OS map. I was faced by an obvious bank and ditch enclosing a small circular area right on the crest of the hill. Small steps had been set into the bank and beside them sat a large boulder that seemed to be gaurding the entrance somehow. 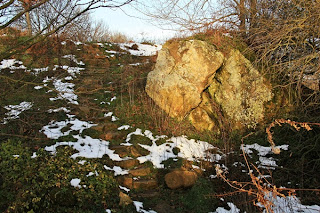 I left an offering there, lit a candle, and asked permission to enter.


A feary woman with wings appeared, possibly the same one I'd seen earlier, and she beckoned me onwards.


I entered the fort and climbed to the top of the hill where a large sycamore tree sat. 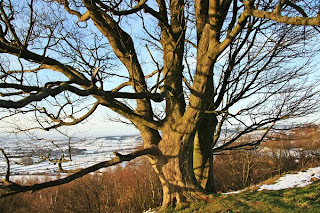 The views all around were stunning! 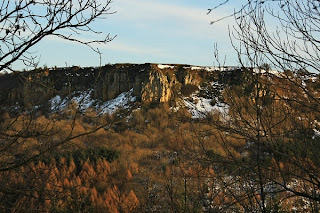 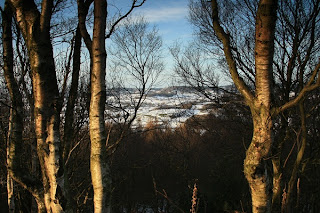 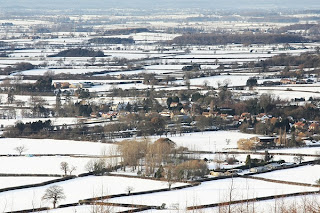 I stood in front of the sycamore tree, on the highest point of the hill, and planted the pointy end of my hazel wand into the ground. I then felt like the crystal I had found in Wales had to be placed on top of it (This crystal needs attaching to my wand!)

As I did so a beam of white light shot out in all directions like a beacon. It felt like I had drawn energy into the place and then transmitted it outwards. I sat under the sycamore tree and was met by my faery guide Atheron. He told me the faeries here were pleased by what I'd done. The noble people here have stayed well hidden for a long time, but they could now come to the solstice gathering! I must now go to lake Gormire to call upon and heal the water spirits there with a smooth white pebble. Atheron asked me if there's anything I would like in return, and I told him that I'd just like to meet some of the animals of the forest.

On my way back I saw three roe deer who reminded me to be happy and carefree, and a group of long-tailed tits who were whistling all around me.

As usual the information I was getting was puzzling and cryptic, but by now I was learning to just go along along with it, and not to expect too many answers. Sometimes the tasks I have to perform are so small and simple it leaves me thinking there must be more to it; but somehow I am carrying energies around from place to place, and perhaps that is all that is required of me.

Lake Gormire is glacial lake left behind after the last Ice Age. It is very near to Hood Hill and I would return to perform my task there the very next day.