After my first visit to the fairy mound in Lindsaylands I was told by the Fae to collect some crystals. I wasn't told which crystals to collect, just that I should use my intuition to guide me. With this in mind I visited a crystal wholesalers in Yorkshire and was immediately drawn to the green flourite; green crystals with purple inclusions, formed into the shape of small eggs. I bought these along with several other crystals and then returned to Scotland. (I later learned that green flourite had an association with the Fae, so my intuition had been spot on!)


I returned to the Lindsaylands fairy mound on a cold December morning.

Immediately I could see my guide Atheron, the tall, dark-haired fae I had met on my first visit, and he led me back to the great beech tree on top of the long mound. 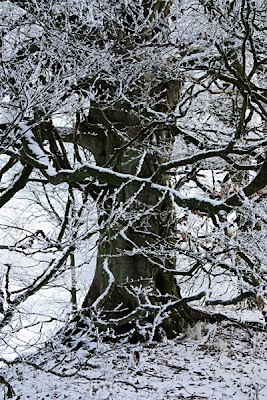 I felt drawn to give some energy to this tree so I closed my eyes and placed my hands against the trunk.

I could feel the energy passing from my hand, coursing through trunk, branch, root and twig to fill the entire tree with healing light.

I was starting to realise that I really had this power to heal and to impart energy where it was required!


I opened my eyes and was astounded to see all the moss covering the tree glowing a vivid green, the colour was so bright and intense that everything seemed lucid and magical, more real and intense than everyday reality ever was. The green sheen that covers most of the tree is barely visible normally. 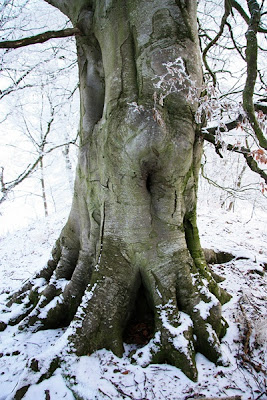 I closed my eyes again and this time travelled with Atheron deep inside the tree to meet the faery king. He stood there with his court and came to greet me like an old friend, which indeed I was, as I could suddenly remember having visited this place many times before in long ages past. Somehow I felt like I was one of them, one of the noble race. I looked down and saw that I was wearing a white shirt of silky appearance and on my chest sparkled the deep-blue teardrop shaped gem.


"Greetings Aurvandil!" he said to me as he hugged me.


Was that who I was? Aurvandil? It certainly felt like I was him now. The human being I was on Earth seemed like another person, a strange shell that I had been inhabiting, full of negative emotions. Had I forgotten my true identity in order to live as a human and carry out my task here on Earth? Now I will start to remember, slowly it will come back to me who I really am...


I don't remember if he spoke to me, or if the information suddenly just dropped into my head, but I remembered the world of the fae, a beautiful and undying land where nothing ever faded or decayed, everything remained constant and true to its perfect form. The Fae had no wish to come back to Earth, they were content in their own land, but Earth is under attack by dark forces. The balance of nature is slowly being destroyed, but the "day of reckoning" is soon to come when mankind will have to pay back for all they have taken.


I was told to take my 12 green crystal eggs (seeds?) and plant them in the Earth, to return to Hood Hill and start my task there, planting my crystal-tipped wand into the ground to bring energy into these locations, but more than that I could not ascertain, the true meaning of my quest and the meaning of the coming solstice gathering still eluded me.

I was told that dark forces were against me and would try to sabotage my mission. This included fears, doubts and suspicions that would enter into my consciousness.


I walked away from the mound with much to think about. What a revelation to suddenly remember a whole existence that I had completely forgotten! But it didn't feel strange or odd, it felt perfectly natural, like I had always known it.


I returned to the mound later to leave my flourite eggs under the tree. They would be left there overnight and while resting there would be infused with the energies needed to complete my task.

Want To Boost Your ClickBank Banner Traffic And Commissions?