This was going to be a special day, not only was it the winter solstice, and a full moon, and a total lunar eclipse, but it was also the day when the clans of the Fae were going to have their gathering!


The winter solstice, the shortest day of the year, is one of those magical times when the veil between our world and the Otherworld is thinnest; the night of the full moon is a time when people have commonly seen the Fae according to folklore; and the total eclipse is a time of dark magic, when normal rules do not apply!


A total eclipse of the moon can only occur during a full moon, as this is the time when the moon is opposite the sun when viewed from the Earth, so the Earth can pass between the sun and the moon and therefore cast its shadow upon it.


The night before the solstice was bright and clear, and the moon, looking completely full, beamed down from a clear black sky peppered with stars. 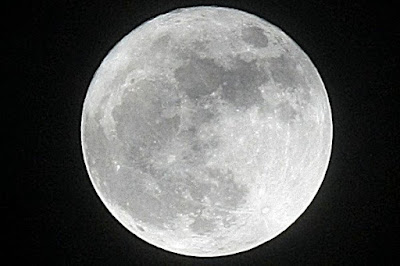 I stood and meditated under the full moon and had a vision of the Fae pushing a large cart up a hill. The cart contained a huge glowing white disc which I assumed represented the moon. The cart reached the top of the hill and hundreds of Fae were gathered around, perhaps having some kind of ceremony.


For weeks now we had been getting messages that the Fae were going to gather on the solstice near to the fairy mound in Lindsaylands. It seemed like the gathering had already started, but exactly where they were and what they were doing I could not ascertain.


I got up at 6 o'clock the next morning in order to see the eclipse. As I stepped outside I could see that the sky was crystal clear and the moon was a glowing white ball, filling the sky with its radiance.


I drove to the fairy mound in Lindsaylands and by the time I got there I looked up through the trees and could already see that part of the moon was being eaten by the shadow of the Earth. I tuned in at the fairy mound but there were no Fae there, none at all! Were they all away performing their ceremony on the hilltop somewhere?


I decided to drive to Tinnis castle to get a better view of the morning sky. I wanted to walk to the top of the hill but it was intensely cold, at least -15 degrees, and in any case the eclipse was now almost total. I didn't want to miss it and so I got out my camera and tripod and tried to get some shots, despite my freezing cold fingers. 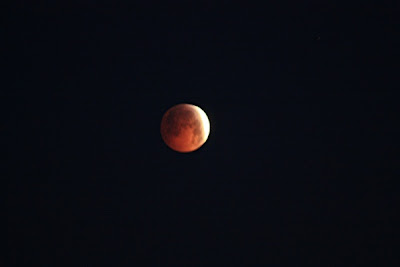 I was disappointed that I hadn't had any encounters with the Fae that night, but today was the solstice and tonight was the longest night, so there was still time...


Alphedia was running a fairy magic course in her yurt that day to coincide with the solstice and the Fae gathering. It was icy cold but soon warmed up inside the yurt. We did some meditations to get into the right frame of mind and connected with the four elements of earth, air, fire and water. I particularily remember becoming at one with each of the elements, like I was an elemental myself, merging with the earth, and then with the air, fire and water. Feeling what it was like to become a flame or to disperse on an ocean current.


Once the light started to fade we all walked over to the fairy mound, passed by the folly of a greek temple, and stood facing the magical beech tree. 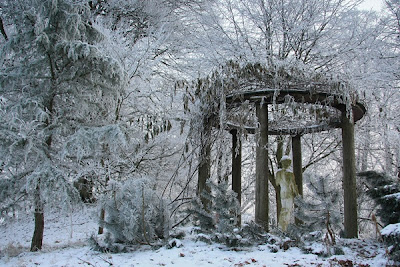 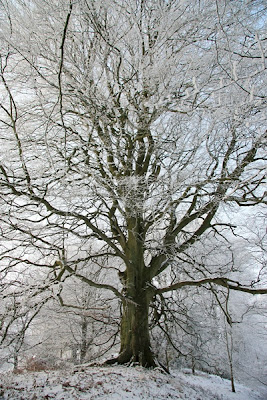 We had come in the twilight to meet the fairy king, so we left an offering of honey beneath the tree, closed our eyes, and then tuned in to the faery realm.


The king and queen were seated on their thrones surrounded by the fairy court. We each stepped forward, one after the other, to receive our gifts. I knelt down and had a glowing necklace of light placed around my neck and a glowing circlet of light placed on my head. I was wearing a blue crystal and silver necklace which I had been inspired to purchase earlier, and I felt the magical light enter it. The king called himself Erowyn and I also got the message that my guide Atheron was dark elf from underground.


Before I got chance to find out more it was time for us to leave. We were walking back at the most magical time of night, the deep twilight, when your day vision gives way to your night vision. The moon had not yet risen and a slight haziness hung in the air. Alphedia paused and turned to look at the field by the fairy mound. We all stopped to look and suddenly I saw a twinkle of light, then another, and then another! Each time coming from an entirely different part of the field, a sudden twinkle that disappeared faster than you could look at it, somtimes blue, somtimes white. I stood gazing in wonder, I had never seen anything like this before! It seemed like at the most magical time of the night on one of the most magical days of the year that anything was possible!


Alphedia soon turned and walked away, she had seen the fairy lights many times before, but I stood entranced. In addition to the twinkling fairy lights I was starting to discern faint patches of light moving back and forth across the field, like faint clouds of luminesence; but after a while I too had to pull myself away before I froze solid! In any case the twilight was passing and a hazy moon was just starting to rise above the trees on the opposite side of the field, banishing the twilight with its luminous glow.


We returned to the yurt and ate our fairy feast, but something was drawing me back to the mound, I felt like the day was not done yet! Sara also wanted to return and so just before midnight we made our way back in the darkness and extreme cold to the fairy mound.


I entered their realm again and spoke some more with King Erowyn. He called me 'Arendil' and told me I was the wayfarer / waymaker. How back in the faery realm I had travelled from rath to rath connecting the web and joining the points of power. It started to come back to me, my long travels and my warm greetings in the fairy forts (raths) which I seemed to visit in some kind of circuit; but it still seemed like the purpose of my work in the Otherworld was beyond my comprehension, even the word 'work' seemed inappropriate, it was more like a calling, a purpose for being.


Sara was meanwhile having an experience of her own, being carried off into the stars to meet the "creator", an experience which seemed to completely blow her away and overwhelm her! In the end I had to help bring her back down, before we made our way back from the dark frozen landscape to the warmth of Alphedia's cosy house.


A few days later I did some research on the internet and came up with some amazing facts and co-incidences. Aurvandil and Earendil are one and the same! Aurvandil being Norse and Earendil being Saxon, they both mean "Luminous Wanderer" and could refer to the morning star (Venus) or the star Rigel (Aurvandil's toe from Snorri's Edda).


The Anglo-Saxon poem 'Christ I' has this:

"Hail Earendil!
Brightest of angels!
Over middle-earth to men sent,
The true radiance of the sun,
Bright above the stars,
Every season thou of thyself
Ever illuminest!"


Tolkien, being a scholar of Old Norse and Anglo-Saxon, picked up on this and used the name for one of the elves in 'The Silmarillion':


He carried the light of the moning star upon his brow. His jewel was a green beryl (emerald) which was set into a silver brooch in the shape of an eagle with outspread wings. Looking through the stone would see burned and withered things heal again. "The hand that holds it heals", he says. 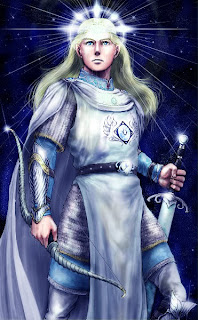 Eärendil married Elwing who was forced to cast herself into the sea with one of the Silmarils, but was saved by the sea god Ulmo and turned her into a great white bird.


Is Tolkien tapping into some ancient knowledge, or did he just make it all up? It's interesting to speculate that perhaps he received his knowledge in the same way I do and spent a long time trying to collate it all and make sense of it. He never did finish the Silmarillion but just left a huge pile of incredibly detailed and extensive notes, including maps, histories, geneologies and two complete Elven languages!


As well as my research I finally got around to attaching the crystal I had found in Merlin's cave on Bardsey island, to the end of my wand. Now it really felt like a powerful tool, capable of chanelling and anchoring energies. I looked forward to using it out in the field again!