Lake Gormire is a Ice-Age lake, tucked away behind its glacial moraine just beneath the edge of the North York Moors. The lake had always intrigued me, it is semi-circular in shape, and yet entirely natural. It is said that an ancient village lies buried beneath the waters which can sometimes be glimpsed on a clear day or the sound of its bells heard. 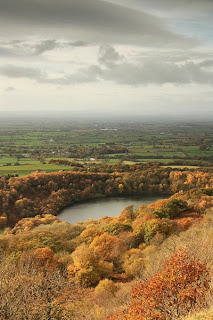 (Photo I took some weeks before)

I had been at the faery rath on the nearby Hood Hill the day before. There I got the message to go to Lake Gormire to "Call upon and heal the selkies of the lake with a smooth white pebble". It's odd that the name 'selkies' should come up, as these female spirits wear seal skins and are usually associated with the sea, but who am I to question? The smooth white pebble was easy to find, as I had one with me that I had picked up in the bay at Findhorn, my 'selkie stone'.

I parked my car in a lane at the far side of the lake and then slipped and slid down an icy path through the woods until I reached the lakeside. There I got a bit of a shock! The entire lake was frozen solid! In Yorkshire that's quite an unusual sight, as rarely does it get so cold as to freeze over a lake of this size, and there had been a thaw on for several days. 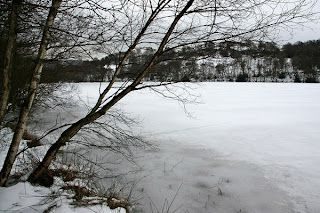 I placed my pebble down on the frozen edge of the lake and called upon the selkies.

I had a vision of naked women with long flowing hair gliding over the lake towards me. At the bottom of the lake, deep down at the bottom of a cone, I could sense an awesome and powerful presence. I sensed the form of a sleeping dragon!

I planted my wand into the snow at the edge of the lake, attached the crystal, and then called upon the spirits of the place to awaken:

I cast the pebble out onto the lake and it slid across the frozen surface until it skidded to a halt in the snow.

The selkies were drawn to the pebble and began to dance around it and draw energy from it. They span around and around it until they transformed into a cone that rose into the air like a whirlwind. The selkies could still be seen dancing in the cone as it extended all the way up into the sky, and down to the very bowels of the lake, connecting heaven with earth.

It felt now like I must join them, so I took a tentative step onto the edge of the frozen lake. But how thick was the ice? Could it hold my weight? Who could rescue me if it cracked and I fell in? Isn't this what water spirits do? Lure people to their deaths? 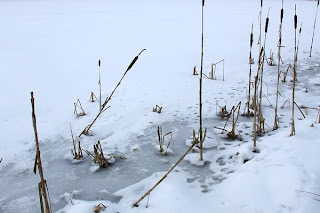 I slid my other foot forward slowly and the ice began to sing as it adjusted to my weight! Waves of sound rippling across it like a sheet of metal being flexed. Having lived in the frozen wastes of Scandinavia I wasn't too freaked out by this, but I slid forward even more gingerly after that surprise. Step by step I slowly made my way forward, I could sense stirrings deep in the lake below me. The dragon could rise up and consume me at any moment! I would never be seen again...

After what seemed like an age I finally reached the pebble far out in the lake, I could sense the depth of the water beneath me which at any other time of the year would have swallowed me up and consumed me. I was walking where none were meant to walk; but I soon settled down and tuned back in to what was going on.

The selkies were still dancing in their cone and chanting:


"We dance for energy,
For happiness,
For joy,
For life!"

I joined them in their dance and span round and round. I became part of their cone connecting the sky with the earth dragon, drawing down energy and sending it deep into the bottom of the lake. The dragon stirred and cast up bubbles from his nostrils. We had awakened him!

I felt like the job was done so I took up my stone and returned to the bank of the lake with more than a little relief!

I set off walking around the lake and heard a gentle trickling sound ahead. I'd heard that the lake had no outlets or inlets so I was surprised by this. As I approached the trickling stopped! I searched around and found a small wet outlet that seemed to disappear underground, but I couldn't catch a sound of the trickling again. I'd heard a folk tale about a goose that disappeared through one of these holes and was later found miles away without any feathers on! Perhaps this was the place from the story?

As I turned back to the path I noticed a large ring of melted ice far out in the lake which I'm sure hadn't been there before! Was this the dragon's breath causing the ice to melt? 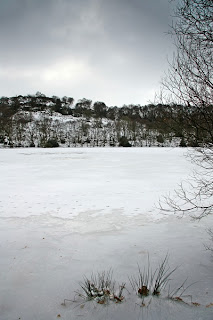 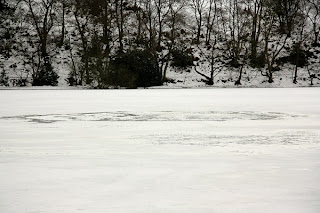 I continued around the lake, viewing it from all sides, struggling along the icy paths through the woods until I reached my starting point again, and then for some crazy reason decided to circle the lake another two times! 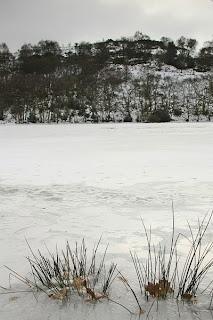 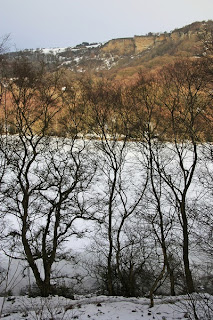 Feeling quite exhausted I finally completed my thrice sunwise circuit and sat down. I felt that there was still more to do here and so I sent my spirit out into the lake.

My spirit, or avatar, took the form of a large muscular horned being made from pure white light. He stood over the melted ring of ice, plunged his arms into the water and hauled on a huge chain. He pulled and pulled with all his might until a dragon's head emerged from the water, attached to the other end of the chain! He held on to him using all his strength, I could feel him straining at the chain and knew he wouldn't be able to hold him for too long.

I picked up my crystal-tipped wand and pointed it at the dragon.

A burst of energy immediately shot out from the dragon and sent a beam of light all the way to the top of Hood Hill. The energy hit the crystal that I had placed there the day before and spread out in all directions. Perhaps the beams of energy were connecting to other similar places, forming a network of energy lines all around the Earth?

Well I can't say that it hadn't been an eventful day! What an experience! But what was I doing? Creating ley lines?? This energy grid connecting the fairy forts together certainly seemed to be something important. Was this my task? Was this why I was planting crystals? Who can tell?