Today I headed for Skellig Michael, a remote monastery off the West coast of County Kerry in Ireland. It is famous for its remarkably preserved state, having been founded as early as the 6th century and abandoned in the 12th century, it has changed very little since that date.

This was the second time I had tried to get to Skellig Michael, the previous time was a few years ago and the trip was cancelled due to bad weather. Perhaps I was not ready to go at that time because this was before I had heard about Apollo/Athena ley line, that makes its first major crossing on Skellig Michael.

After driving all the way across Ireland for 6 hours, I really felt ready to go this time, and trusted that everything would work out as it should, even if I had to try again tomorrow… Suddenly I overheard an old lady tell her friend that she couldn't go and wanted to sell her ticket, so of course I jumped at the chance and offered her the money immediately! I couldn't believe my luck as I walked down the pier to the boat, the other eight people who were waiting didn't say a word (though I’m sure they were giving me daggers!)

As the boat headed off towards the island I still couldn't believe that I was actually on my way to Skellig Michael at last! All those other poor people were still standing by the pier as our boat chugged off along the calm sound between the mainland and Valentia island, and then out through a narrow channel onto the big rolling waves of the Atlantic Ocean. Immediately Skellig Michael was visible in the distance, a tall black pyramid of rock jutting out of the limitless ocean. I imagined the poor monks in their small coracles making the treacherous journey out to this remote windswept island all those centuries ago, where all that waited for them was a life of isolation and austerity living on fish and seabird eggs. 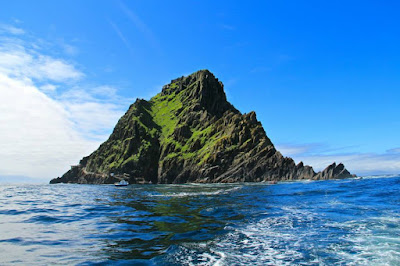 The name Skellig derives from Sceillic which means 'steep rock'

To avoid seasickness I kept standing and focused upon the distant island, and within 45 minutes we were there landing at the tiny dock. The climb was a hard slog up, and the tiny monastery at the top was flooded with tourists, making it difficult to get any good photos. 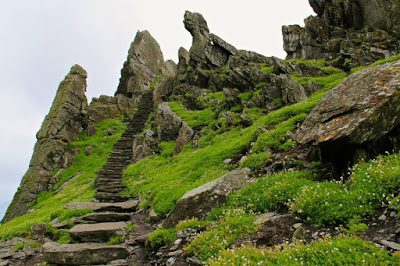 Steep flight of steps leading to the monastery 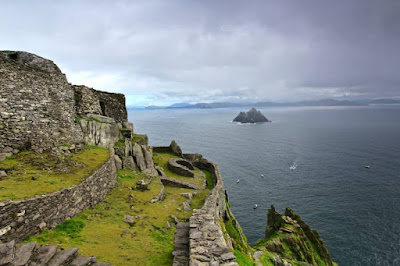 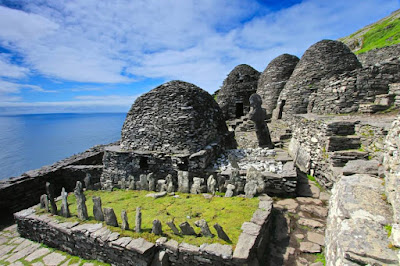 Series of cells and the monk's cemetary 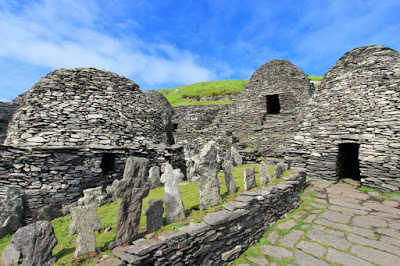 I located the Apollo/Athena node in a roofless monks cell, but unfortunately the entrance was sealed off with a block of wood. I had already been told off once for walking somewhere I shouldn't, and clearly this cell was out of bounds too. What to do? Well eventually there was nothing for it but to brazenly climb under the block of wood, plant my crystal in the cell, and perform a little ritual there which would activate the whole of the Apollo/Athena line starting at this point. Luckily the guides didn't notice and the tourists paid little attention. 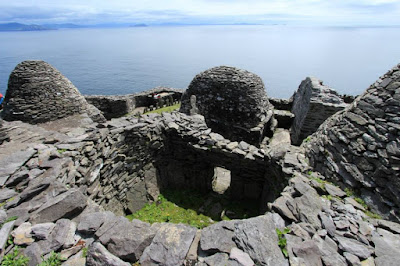 Location of the Apollo-Athena node

As I sat there I felt a warm peaceful feeling take over me, I envisioned all the energies rising up from this place, the heat from the Earth rising up through this pyramid-like volcano, surrounded on all sides by sea and sky. All four elements were here in great abundance and this was surely one the key anchor points for the whole of the Apollo/Athena line, the wild energies of this place would be carried all the way along the line across Cornwall, France, Italy and Greece, into the Holy Land, bringing with it the peaceful energy of this place and the vitality of its raw nature!

Get professional trading signals delivered to your cell phone every day.

Start following our signals NOW & make up to 270% per day.